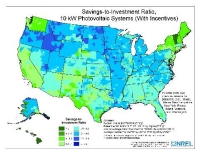 In a rational world, the sunniest places would have the warmest reception for solar technology and investment. While solar is having its day in the sun in Hawaii, state incentives make the economics of photovolatics equally attractive in Vermont, a state not known for its sunny skies. And while California is famous for its rapid deployment of solar, the economics are at least as good in Washington state, New York, New Hampshire, and chilly Maine.

It’s not only the economics of solar which can counter-intuitively get better to the North.  There are also some unique opportunities for small investors to finance of solar projects.  Last year, I wrote about attempts to allow US retail investors to invest in solar projects through Real Estate Investment Trusts (REITs) and Master Limited Partnerships (MLPs).  Solar REITs would require a ruling from the IRS, which now looks unlikely, while Solar MLPs would require an act of Congress…a Congress that can’t even keep the government open for business, let alone enact useful legislation.

Solar Mosaic offers small investors the opportunity to participate in loans directly, but the number of opportunities has so far been limited.  The interest on offer (4.5 percent) is attractive compared to many fixed income investments.  Unfortunately, Mosaic investments don’t allow the freedom to sell which investors can get with ordinary bonds or CDs, and are not available in tax-advantaged retirement accounts.

Power REIT is investing in the land under solar projects, but is in the middle of a civil case with Norfolk Southern (NYSE:NSC) and Wheeling & Lake Erie.  Resolution of this civil action has the potential to easily more than double the value of PW stock with (in my opinion) very little downside risk, but the associated expenses have forced Power REIT to temporarily suspend its dividend.  When the case is resolved and the dividend resumed, I expect Power REIT to become an attractive solar income investment.  Until then, I still consider it an attractive investment on the basis of the huge potential upside from the civil case, but it is not an income investment.

In contrast, I am very enthusiastic about Hannon Armstrong as a green income investment.  I’m confident that the company will be able to increase its dividend to $0.93 or more per year over the next two to three quarters, which will translate into an 8.2 percent yield at the current price of $11.32.  But HASI is an investment in sustainable infrastructure (mostly energy efficiency), as opposed to solar.

Two other clean energy income investments have gone public in the US are Pattern Energy Group (NASD:PEGI) and NRG Yield (NYSE:NYLD).  Both invest in clean energy infrastructure but only have minor investments in solar.  Pattern Energy plans to pay an initial $1.25 annual dividend, or 5.5 percent at the current price of $22.63 per share.  NRG Yield is expected to pay an annual dividend of $1.20 per share  initially and hopes to ramp that up to $1.44 per share by the end of 2014, corresponding to dividend yields of 3.9 percent and 4.7 percent at the current price of $30.58.  I have not evaluated either of these companies in depth, but plan to do so soon.

In many ways, our Canadian friends to the North are as far ahead of us in creating a sunny climate for solar income investment as Vermont is ahead of Florida in creating a sunny climate for solar installations.  CleanREIT Partners, LLC is a specialty finance/management company investing in solar installations and based in California, but planning an initial public offering on a Canadian exchange to allow investors to take advantage of a structure called a foreign asset income trust.  I recently spoke to Bill Hillard, co-founder of CleanREIT, and asked him what made him consider Canada.

I expected him to cite the tax advantages of Canadian foreign asset income trusts.  Like US REITs, such trusts are not subject to income tax at the corporate level, but instead Hillard cited the large number of comparable renewable energy income investments already trading in Canada.  (I wrote about six of these, and selected the one I consider most attractive here.  Not only are there more than on US exchanges, but the yields on offer are typically higher.)  According to Hillard, solar’s existing tax advantages should be sufficient to shelter the income from solar investments to the extent that legislation such as the MLP Parity Act would not be necessary to create a US-listed solar investment vehicle which would not be subject to tax at the corporate level.

For investment bankers who would be underwriting the offering, having comparable companies already trading on the same exchange makes it much easier to price the offering.  In the end, if a company can’t find an investment banker willing to take it public, there will be no IPO.

The foreign asset income trust arose out of an exception in Canada’s 2007 “SIFT” rules which required Canadian income trusts to begin paying corporate tax on Canadian assets.  The purpose of these rules was to reverse the hollowing out of Canada’s tax base.  This hollowing out was the result of Canadian corporations converting to trust structures, which had only been subject to tax at the investor level, and not the corporate level at the time.  Because the SIFT rules were narrowly designed to prevent the loss of tax on Canadian corporate assets, they left in place the ability of a trust to avoid Canadian corporate income tax on foreign corporate assets.  This income would only be taxable to investors, not the corporation.

According to Hillard, income distributed to US investors in a carefully managed Canadian solar foreign asset income trust should also be tax-free because of the income tax shelter afforded by accelerated depreciation.  To his (and my) surprise, many large investors he has been speaking with seem more interested in this ability to avoid tax at all levels than the actual income on offer.

That said, the yield should also be attractive.  The distributed-scale, operating  solar projects the CleanREIT team has identified produce a 9 percent to 10 percent unlevered cash yield, according to company documents Hillard shared with me.  They expect to be able to grow income over time as rising interest rates and higher electricity prices increase the income on solar projects.  They also expect that solar technology efficiency gains will create investment opportunities to generate more revenue per square foot by upgrading existing solar plants as they age.  At the retail investor level, they expect this strategy to result in a 7 percent dividend yield plus growth in equity over time.

CleanREIT could IPO as soon as 2014 given sufficient capital from outside investors to consummate pre-IPO solar purchases and continued attractive conditions in public markets.

Although a handful of clean energy income investments are  now available in the US, American investors would do well by considering Canadian stocks.  The existence of numerous comparable companies, favorable tax structures, and higher yields look likely to keep the Toronto Stock Exchange an attractive venue for both clean energy investors and financiers for years to come.  If CleanREIT successfully executes on its plan to IPO as a high-yield, tax-free, distributed solar investment, Canada will be virtually irresistible to American sun-seeking investors.

This article was first published on the author’s Forbes.com blog, Green Stocks on October 18th and AltEnergy Stocks and was republished with permission.

Disclosure: I am long PW and HASI.