More
Home Blogs Sun Gets Even

One of the truest observations ever made about solar energy (famously attributed to Nathan Lewis of the California Institute of Technology (Cal Tech) by NY Times columnist Thomas Friedman) is that, unlike the emergence of the hand-sized cellular phone which was such a breakthrough people were immediately willing to pay whatever it cost, solar energy-generated electricity does nothing “new.” People already have electricity. Why should they pay more for it?

Concerns about global climate change and other degradations associated with fossil fuel-generated electricity somewhat diminish the profundity of Professor Lewis’ observation. But only somewhat, which is why researchers at Cal Tech and many other innovation centers around the nation and around the world are working hard to achieve a grid parity cost for solar energy.

The grid parity point (also called the break-even cost) is defined in Break-Even Cost for Residential Photovoltaics in the United States: Key Drivers and Sensitivities, from the U.S. Department of Energy (DOE) National Renewable Energy Laboratory, as the point at which the cost of solar energy-generated electricity from residential photovoltaic (PV) panels is even with the cost of electricity purchased from the grid. 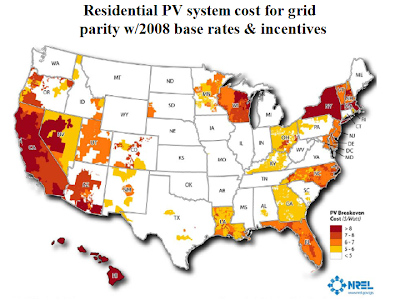 The NREL researchers looked at the price of electricity in late 2008/early 2009 at the biggest 1000 U.S. utilities to calculate this wide variation in grid parity points and noted the solar resource across the country does not vary by nearly so much. They found that the key drivers of the grid parity point for PV-generated electricity are not technical factors (solar resource, rooftop orientation) but non-technical considerations such as the cost of electricity from the grid, the rate structure, or the cost and availability of PV system financing.

The NREL paper concludes a hypothetical assessment of what grid parity might look like in 2015 when there are more efficient PV systems and policies that put a price on greenhouse gas emissions. It also makes suggestions for further study. 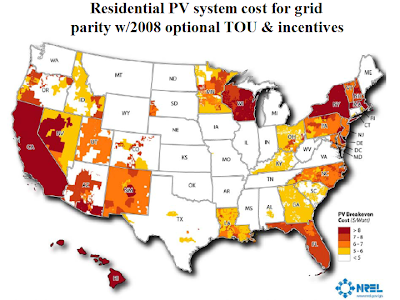