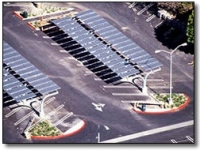 The University of California Board of Regents voted unanimously last week in favor of a clean energy and green building policy. The vote follows a yearlong “UC Go Solar!” campaign run by students across the state and Greenpeace. The campaign called for the Regents to adopt a comprehensive Clean Energy and Green Building policy to make UC a national leader in environmental stewardship.

San Francisco, California, July 21, 2003 [SolarAccess.com] “The Green Building Policy and Clean Energy Standard will provide UC with an important new set of guidelines for environmental sustainability,” said George M. Marcus, chair of the regents’ grounds and buildings committee. “We greatly value the committed work of the student groups and others with whom the university worked in partnership to develop this new policy.” Since September, students and faculty sent more than 10,000 postcards to the university in support of the campaign. VIPs including Lt. Governor Cruz M. Bustamente endorsed it. Dozens of editorials have appeared in student newspapers urging the Regents to take action. “This victory for the environment is the product of collaboration between Students, Faculty, Administrators, Regents and Greenpeace,” said Kristin Casper, campaigner with Greenpeace. “The UC’s leadership will pave the way for campuses across the U.S. toward a clean, sustainable future. Now there is a clear road map for others to follow.” According to a recent Greenpeace study, due to the combination of the UC vote and the Los Angeles Community College District’s pledge to generate 10 percent of the energy use of new buildings with onsite renewable energy, the current total amount of grid-connected solar power in the US could increase by nearly 30 present above current levels. The study also noted that academic institutions are a driving force in building a clean energy economy for our country. The University of California policy mandates: -10 MW (equivalent to power used by 5,000 homes) of renewable energy be installed across the 10 campuses (Currently only 40 MW of solar energy are grid-connected in California and 52 MW total in the U.S.). -The purchase of 10 percent of the university’s utility purchased energy from clean energy sources immediately and ramping up to 20 percent by 2017, enough to power 26,000 homes. -All new campus building across the state will be built to green building standards (except acute care facilities) -Reduction of system-wide energy use to 10 percent below 2000 levels by 2014 in order to reduce consumption of non-renewable energy sources. Following the UC’s lead, students on more than 50 campuses across the country are expected to launch Clean Energy campaigns this fall, to inspire their schools to replicate the UC system. The Greenpeace report shows that if every U.S. college campus were to match the UC solar energy policy, the total grid-connected solar installations in the United States would increase more than 50 fold. With this surge, prices of solar could be expected to drop by as much as 23 percent, making it competitive with conventional, polluting energies in many areas.