Sandia National Laboratories in New Mexico, famous for its nuclear research programs is now home to Stirling Energy Systems, the solar thermal company that initially announced plans to develop large levels of solar thermal capacity in 2005 and subsequently dropped off the radar. The company is backed now with capital, an alliance with DOE and a development arm called Tessera Solar. 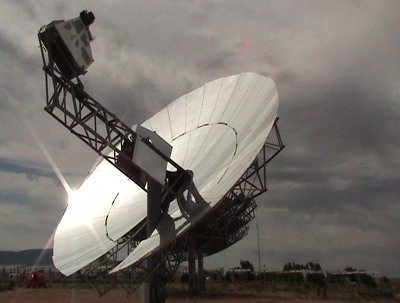 I had the opportunity to tour the company’s facility at Sandia and to see the prototypes of the company’s stirling engine-based solar energy generators and to hear about its new plans for the future.

Tessera North America CEO Bob Lukefahr told me that the company plans to put more than 1 gigawatt (GW) of projects on the ground by 2012. The first will be a demonstration facility in Arizona that is set to break ground in September of this year. The facility will use 60 of the company’s 25-kilowatt dishes, giving the project an installed capacity of 1.5 megawatts (MW).

From there, the company laid out the road to a gigawatt to a group of journalists and analysts. Following the construction of the demonstration plant, the company said that it will start building the first phase of the long awaited Imperial Valley project, the power from which is slated to be taken by San Diego Gas & Electric. That first phase will be 300-MW in size. Following completion of that phase, a 450-MW phase two will be built. The second phase however is subject to the Sunrise Power Link being constructed.

In addition to the Imperial Valley project, Tessera and Stirling plan to start building in Calico, California in September of 2010. That Calico, project is slated to have a capacity of 850 MW, all of which is contracted to be sold to Southern California Edison. 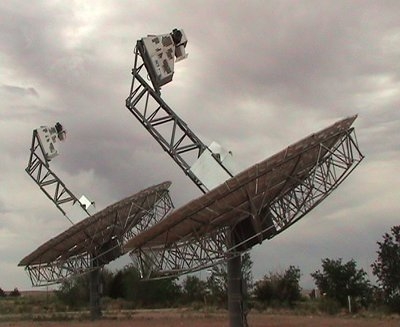 Stirling CEO, Steve Cowman said that the company has enough capital to operate through the middle of next year and that its development schedule should ensure that there is no lack of funding. To make sure of this, Cowman said that the company has been in talks with a number of financial firms about raising money to get the projects on the ground.

One of the biggest reasons Cowman said he expects the companies to be successful is that the Stirling engine technology and all the components for the generators, including mirrors, panels and a steel towers can, and are being made by companies in the automotive supply chain that are capable of mass production at low costs.

Stirling and Tessera outlined a very ambitious development pipeline of the the couple of years. The company, which has been notoriously quiet in recent years certainly seems like its back. RenewableEnergyWorld.com will keep track of the development processes on each of the projects the company mentioned in the coming months.