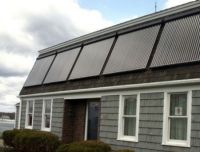 Commercial and residential customers install solutions that heat their water, businesses and homes. But what happens when there is too much of a good thing? Solar water heating systems can and do overheat, creating both inconvenience and cost for the customer. But a European technique called steamback or vapor drainback provides multiple advantages over existing technologies, including fewer service calls, more system uptime, and reduced overall costs.

The two primary causes of overheating in solar systems are underuse of the heated water and electrical power outages. The former is rare in winter months, but can wreak havoc during the summer months, especially since those periods often correspond with family vacations and there may be no hot water demand for days or weeks at a time. The latter is all too common, particularly during thunderstorm season when a freak storm knocks out power and is followed by a bright sunny day. It only takes an outage of an hour or two of sun without circulation to cause the system to overheat.

There are multiple design options to ensure systems don’t overheat, but as our industry grows and matures, installers know that customers demand a robust solution. Few customers want to invest significant sums to mitigate a relatively infrequent situation. Historically most closed-loop solar hot water systems have relied on control strategies that either dump excess hot water from the tank into a drain, or on dump zones which dump heat from the solar loop itself once the tank has reached a certain set point. Those strategies work, but the first wastes water and the latter wastes electricity, and both introduce additional costs and failure points to the system.

More recently, solar pump controllers with advanced logic allow the installer to set up night time recirculation to scrub excess heat from the solar tank at night when the collectors are cooler. But nighttime recirculation also increases parasitic power and furthermore doesn’t work all that well for systems designed with well-insulated collectors (for example evacuated tube collectors).

As a last resort, most systems rely on pressure-relief valves (PRVs) that when activated, protect against dangerous and damaging overpressure in the system, but also make a mess and completely shut the system down. Restarting the solar hot-water system then requires a service call and a technician with a fill pump to recharge and repressurize the system.

In 2008, having experienced the limitations and liabilities associated with these other methods, we set out to find a better way to protect our installations from overheating and power failures. In researching literature, we discovered a method called steamback that can resolve many of the challenges of traditional systems. This simple method is widely used in closed-loop systems in Europe, especially ‘combi’ systems that provide both heat and hot water and thus are necessarily oversized during the non-heating season.

Unlike the traditional options, steamback is a passive overheat protection and doesn’t require additional hardware or introduce additional failure points to the system; it simply involves an understanding of the details of piping and collector geometry plus expansion tank sizing and location to capture and protect the coolant during an overheating situation.

Steamback systems work as follows: when the solar hot-water tank reaches its maximum temperature – typically around 180 degrees – the solar controller automatically switches the pump off. If the sun is still out and producing heat in the collector, the collector temperature will continue to climb. When the temperature of the water/antifreeze mixture in the collector rises above the boiling point (typically around 240-250 degrees depending on system pressure), it will start to boil. Since water vapor (steam) occupies about 1,600 times more volume than an equivalent amount of water as a liquid, it only takes a tiny amount of evaporation to fill the collectors with steam and push all of the remaining antifreeze mixture down into the expansion tank.

For a typical 4×8 harp-type collector with a fluid volume of roughly one gallon, we’re talking about a little less than half a teaspoon of fluid that needs to boil to fill the entire collector with steam. For heat pipe evacuated tube collectors, with typical manifold fluid volumes of 0.2 G, the amount is even less. Once the collectors fill with steam, they can continue to heat as long as the sun stays out, but the antifreeze and the rest of the system components are successfully protected from the elevated temperatures. When the sun sets, the vapor in the collectors condenses, and the entire collector loop recovers overnight.

Though steamback is reliable and elegantly simple, there are a few design details that are important to get right when using this strategy. The first is that expansion tank in the solar loop should be sized appropriately, as during steamback the tank needs to accept not only the normal volume due to thermal expansion but also the entire fluid volume from the collector (which is being pushed down to the tank by the steam). If you look carefully at most of the conventional solar expansion tank-sizing formula and guidance, you’ll usually find that you are already sizing expansion vessels in this way.

Another important detail relates to collector flow geometry and geometry of the near-collector piping. As you can imagine, the better the emptying characteristics of the collector and piping, the quicker the fluid will drain from these areas and the less stress is placed on the heat-transfer fluid in the process. This means that piping that slopes downward away from the collectors is preferred; for serpentine-type collectors, having supply and return on the bottom or side of the collector is preferred compared to having connections on top. Finally, locating the expansion downstream of any system check valves also helps make steamback more graceful because it allows fluid to exit the collector in both directions, as opposed to only through the return piping.

This technology is not new – many European systems include some version of a steamback system – but I was surprised to find almost no mention of it in any of the US solar trade publications or manufacturer’s literature. After conducting numerous short- and long-term tests both in our shop and at some customer sites, we were fully convinced that it is a simple, reliable, and low-cost method for protecting systems from overheating or power failures.

With very few exceptions, Revision Energy now deploys it across the board for overheating protection in all solar hot water systems installed, ranging from small residential systems of just one or two collectors, to large commercial systems with thousands of square feet of collector area. Summertime service calls for blown pressure relief valves have dropped dramatically. In addition, there is no longer a high volume of calls to reset and recharge systems after power outages.

While reducing the level of on-site service calls is a good benefit both for the solar installer and the client, perhaps the most important benefit is in the overall durability and robustness of the system. This is especially relevant in commercial applications where many other contractors work on or around solar energy systems. Each plumber, electrician, or custodian can wreak havoc on a solar system with the careless flick of a switch or turn of a valve. With steamback in place, the solar system is less sensitive to these careless actions. In almost any case, the solar system will automatically self-protect and then recover gracefully once the temporary condition is resolved.

Steamback technology is an all-around winner: It does not require expensive components, additional water for dumping, or increase parasitic power consumption. It makes systems inherently safe and enables them to recover gracefully from tank overheating, component failure, or a power outage. With the right design and installation details, these systems are reliable, cost-effective, and safe. Let the sun shine!