More
Home Solar Staying Alive: Could Thin-film Manufacturers Come Out Ahead in the PV Wars?...

In part one of this article, we talked with a-Si equipment manufacturer, Oerlikon Solar, which was recently purchased by Tokyo Electric.  Here in part two, we talk with two heavy-hitters in the thin-film solar industry to hear their thoughts about the future of thin-film PV and the future of their technologies.

First Solar has robust plans for the future, according to David Erhart, Marketing Communications Manager at the company.

Erhart explained that it is First Solar’s “thin-film technology that takes a simple piece of glass and turns it into a complete solar module in less than two and a half hours in a continuous automated process,” that has fueled the company’s success so far.

To date, the company has more than 5 gigawatts of modules installed worldwide and was the 1st company to break $1 per watt cost barrier, he said.  It is currently manufacturers its panels at a cost of less than $.75 per watt and the company won’t stop there, according to Erhart.  A recently announced restructuring of First Solar should bring the company’s average manufacturing to $0.70-$0.72 per watt in 2012, below prior expectations of $0.74 per watt. In 2013 the company estimates average module manufacturing costs will range from $0.60 to $0.64 per watt.

Erhart said that First Solar is the current world-record holder for CdTe PV cell efficiency at 17.3 percent and PV module efficiency at 14.4 percent, numbers that have been verified by the National Renewable Energy Lab.  The company plans to take those efficiencies to scale.  “We expect to take cadmium telluride thin-film solar technology to levels that it has never been before,” he said.

In addition to module manufacturing, First Solar has become the world’s largest builder and operator of utility-scale power plants. It boasts the “largest pipeline in the industry with more than 2.7 GW of solar PV plants under construction or in development with PPA,” Erhart said.

He pointed to three U.S. projects — the 290-MW Aqua Caliente, the 550-MW Topaz Solar Farm and 550-MW Desert Sunlight projects — as examples of some of the power plants that First Solar is developing, which also happen to be among the largest PV power plants under development in the world.

First Solar has now set its sights on the developing world, in line with many other solar power players.

While acknowledging that markets can shift on a dime, Erhart said “regardless of where the existing markets go, we want to invest in what we call long-term sustainable markets.”  That makes a lot of sense when considering how the on-again, off-again subsidies that are in place in Europe have really dominated market development.

“We don’t want to wake up every day dependent on these subsidies,” said Erhart, explaining why the company is interested in more stable markets such as “markets that have a need for electricity, that have high irradiance, and have high costs of electricity,” he said.

First Solar CFO, Mark Widmar, echoed the company’s expansion plans in a conference call to investors. “Over the next couple of year, we also intend to make progress in sustainable markets,” he said.  More details will be available during the company’s first quarter earnings call, scheduled for early May, after this article goes to press.

“Scores of thin-film silicon manufacturers, drawn by the pied piper of propped poly prices, suddenly saw utilization rates collapse and their low efficiency, very low cost product turn into a very low efficiency, average cost product, evaporating any competitive advantage they might once have had,” he said in his thin-film report.

In terms of competition, Erhart sees the “usual suspects” as First Solar’s main rivals in the space. These are the crystalline solar PV module makers below: 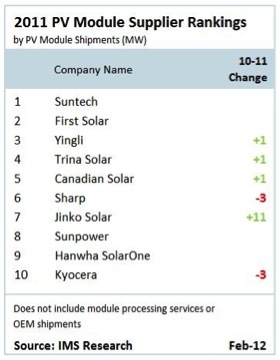 However, he explains that it is not always just other solar companies that First Solar is in competition with: “When you are going into these emerging markets to help them with their dire energy needs, you are not necessarily competing with other solar panel manufacturers, you are competing with other forms of renewable energy,” he said. “In Saudi Arabia, for example, we are competing primarily with diesel, which they would rather sell as gasoline or petrochemicals than burn for their own domestic electricity.”

And as a builder of power plants, the company also can go head to head with “very large construction firms that have been building power plants for a long period of time,” he said.

While those firms have a lot of experience, First Solar has a lot to be proud of as well, according to Erhart.  He said that the company has the lowest balance of systems (BOS) costs in the industry; an award winning safety record; and the fastest installation velocity in the industry.

First Solar CFO Widmar echoed Erhart’s enthusiasm about the company’s future. “Our captive pipeline shows that many of the world’s most sophisticated renewable energy investors continue to invest in projects using our technology, which is being deployed in some of the largest sites in the world, under the toughest desert conditions,” he said.

Other existing CdTe thin-film firms have not had quite the success that First Solar has had so far.  Abound Solar recently announced plans to layoff 180 employees while it builds its next-generation higher-efficiency module.

GE, which acquired PrimeStar Solar last year, said it would be building a 400-MW CdTe factory in Aurora Colorado.  The facility is under construction right now and GE has said that it expects panels to come off the assembly line this year.

“So far, it’s a good year for us,” said Greg Ashley, the company’s Chief Operating Officer for the Americas.  “Even though global prices have stayed low, they pretty much stabilized over the past few months,” he continued.

Solar Frontier manufactures copper indium selenium (CIS) solar panels and has a 1-GW factory in Japan and several smaller facilities in other areas of the world.

Ashely said that CIS has a few advantages over CdTe and a-Si panels.  “Our measured performance ratio is still higher than CadTel,” he said. “I think the fact that we’ve stayed with a very strong framed module, whereas most of the other thin-film folks have gone to frameless, or stayed with frameless gives us some installation/design flexibility that they don’t have,” he explained.

“And our modules are slightly larger so the combination of the frame and the larger size, we typically have lower BOS and are easier to handle,” said Ashley.

Ashley said the company has its eyes set on Japan.  “Demand for us in Japan is exploding [as the country is] getting ready for the new feed-in tariff,” he said.

Japan’s feed-in tariff is supposed to go online July 1 as the country sets to aggressively pursue renewable energy as a result of losing much of its nuclear power capacity.  “So we are positioned pretty well,” said Ashley.

Like the other executives we spoke to, Ashley echoed the market shifts taking place.  He said that for Solar Frontier, the U.S. holds great potential.  “The sun belt is probably going to be, in the long run, the biggest market. Everyone expects it to be,” he said. In addition, he said the company is doing business in the Caribbean, and that it is “pursuing business in Hawaii and we are also pursuing business in Latin America.”

But Japan is where it really plans to grow: “Japan is probably a bigger, faster, easier growth market for us…but in the long run, it’s all the sun belt countries, the developing countries,” he said.

With Shell as a parent company, Solar Frontier doesn’t have a lot of trouble penetrating new markets.  Shell has a long history in the global energy markets said Ashley.  “We’ve got a very strong presence in a very large historical network of relationships both with the private and public sector,” he said.

To date, however, Solar Frontier is working on smaller projects than its rival First Solar.  Ashley said that for now, even its utility projects are in the one to two-megawatt range. Except of course for the 130-MW Catalina solar project, which is located in Kern Coutnry, Calif. and being developed my enXco.  Solar Frontier shipped 30 MW of panels to the Catalina project in the last quarter of 2011 and expects the project to be completed by mid-2013.

Like Oerlikon’s O’Brien and First Solar’s Erhart, Ashley believes that PV module manufacturing pricing will remain in the one dollar per watt range but “in this race to get to installed cost of one dollar per watt, I think we are very far off from that,” he added.

Ashley said that the solar industry’s biggest problem right now is the excess inventory that has built up, a problem that he thinks could be resolved by the country that manufactured a lot of it: China.

“Actually the market in China itself will have a big influence,” he said. Ashley thinks China will begin soon to stimulate its own internal demand and that will reduce the impact that oversupply is having on the market.

In addition to Solar Frontier, other CIGS players include MiaSole, Avancis, Global Solar, Nanosolar, Sotecture and Solibro, which is owned by Q-Cells.  Q-Cells filed for bankruptcy in early April, leaving the fate of Solibro up in the air.

But Solar Frontier’s Ashley remains incredibly optimistic about thin-film.  He said he believes that “thin-film is competitive with crystalline even at the lowest prices” and “not just our technology.”

GTM Research forecasts that global thin-film production and total market value will dip below $3 billion in 2012, it’s latest report projects an up-tick in thin film demand in 2015/16, where the total market, according to GTM will recover to $7.6 billion. 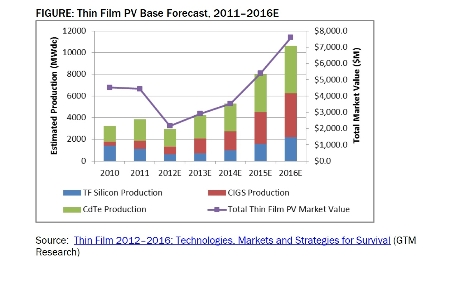 GTM believes that industry’s rebound will be predicated on the continued, though muted, success of First Solar and the execution of efficiency, yield and scale roadmaps from other thin film manufactures.

In particular, GTM predicts strong growth in the copper-indium-gallium-diselenide (CIGS) technology segment, forecasting production at 4 GW in 2016. Even though in 2011, Solar Frontier is the dominant supplier with roughly 400 MW of CIGS PV shipments GTM said that companies like MiaSolé and TSMC could emerge in the next few years as top thin-film suppliers with cost of manufacturing approaching $0.50 per watt. Venture investments in CIGS surpassed $305 million in the past two quarters, albeit at depressed valuations. Coupled with increased interest from global industrial conglomerates on the sidelines, GTM Research predicts major acquisitions in the near future.