More
Home Solar Staying Alive: Could Thin-film Manufacturers Come Out Ahead in the PV Wars?...

New Hampshire, U.S.A. — In the solar electricity market, capitulation, consolidation and contraction are the buzzwords of the day. Today, all solar PV manufacturers face an over-supplied and underfunded PV market. The oversupply and drop in subsidy markets across Europe and the U.S. has forced crystalline silicon manufacturers to sell their PV panels below manufacturing costs or risk losing all market-share. As the weeks tick by, major manufacturers, one after another, are going under or announcing major scaling back of their operations. Thin film solar panel manufacturers have not been able to stay out of the fray, with many of them struggling to keep up with the falling panel cost and oversupply of panels on the market.

MJ Shiao, who authored a comprehensive 322-page report entitled, “THIN FILM 2012–2016: Technologies, Markets and Strategies for Survival” said that the industry may be dying, but it isn’t dead yet.  He pointed out “venture capital investment into thin film in Q4 2011 and Q1 2012 combined to reach nearly $300 million.”

Shiao also pointed to big announcements from the key players in the industry that indicate even as the industry struggles, it has big plans for the future.

Crystalline PV has the cost advantage right now with slightly more efficient panels selling for below one dollar per watt. But thin-film works better in low light conditions and in hot environments, which means that in certain sun drenched areas of the world, thin-film turns out to have a lower levelized cost of energy (LCOE). The LCOE is the final cost to produce a kilowatt-hour of solar power and deliver it to the grid. So while a crystalline silicon PV panel may have a higher efficiency, meaning that it can convert more sunlight to power when the sun is shining, that same crystalline panel will produce energy for a shorter amount of time during the course of any given day.  And that same panel will experience greater degradation of power in hot environments than the thin-film panel, according to all of the thin-film experts interviewed for this article.

Key Players in the Industry

We checked in with makers of all three manufacturing types of thin-films to hear their thoughts about the future of thin-film PV and the future of their technologies.  All three have very big expansion plans.  See the image below for a list of the top suppliers by production: 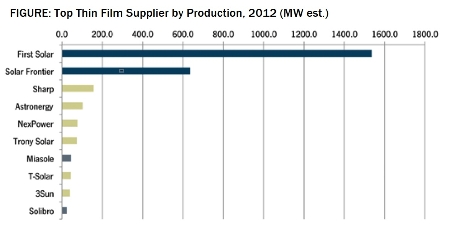 The only small silver lining to the very low solar power panel costs, according to Chris O’Brien, Head of Market Development at Oerlikon Solar, recently acquired by Tokyo Electron (TEL), is that low module prices are driving increased demand for solar power in general.

He points to markets in the Middle East, Africa and India as areas where there is a growing interest in solar PV.  Whereas PV projects in those regions used to be in the sub-megawatt range, he said they are now coming in in the multi-megawatt range.  This is a trend that many in the industry expect to continue.

O’Brien also said that pricing will remain low and only those manufactures that can innovate enough to bring down costs will be able to compete.

“All in solar bids in California are coming in in the range of nine cents per kilowatt-hour.  I think what that reflects is not just the current low prices but an expectation that the price will continue to go down. In that case the RAM [renewable auction mechanism] was for deliveries in 2016.”

Oerlikon, which manufacturers the equipment to build amorphous silicon (a-Si) thin film module manufacturing plants, has seen a drop in equipment upgrades in 2012.  “Most estimates are that the investment this year will be down by more than 50 percent compared to last year,” O’Brien said.

O’Brien explained that in 2010 and 2011 manufacturers expanded aggressively, at what have turned out to be unsustainable rates. He called it a manufacturing equipment bubble. “A number of aspiring manufacturers wanted to copy the success of the 2009 emerging market leaders in China, like Suntech, Trina, Yingli,” he said.  Those tier 1 manufacturers successfully expanded to 2 GW of manufacturing capacity in 2009 and others wanted that success, he said.  What resulted was a glut of panels on the market.  Today, many of those manufacturers who aggressively expanded are now left sorely in debt, stuck with equipment that might not be sellable in the near future.

“I expect there might be some buyer’s remorse,” said O’Brien.

Oerlikon is waiting for the next manufacturing equipment investment cycle to begin and O’Brien expects that to happen by the end of 2012. “I think the market is catching up to the investment that was made in 2010, 2011,” he said.

“What will be different for the next investment cycle,” he said, “is that the cost requirement will be much lower.” Obrien said he expects that manufacturers will need to diversify in order to stay afloat, which might mean that some crystalline silicon manufacturers will differentiate their lines.

“I don’t expect that PV module prices will increase,” he said. “So during the next investment cycle, the cost requirement will be much lower.”

He continued: “The next investment cycle will be shaped by what technologies can provide a sustainable business model at PV module prices that are at or below today’s prices.”

O’Brien said that Oerlikon can deliver a 140-MW manufacturing line that will produce 10.8 percent efficient panels at $0.50 per watt as long as it is running at full capacity. He looks forward to working with Tokyo Electron (TEL) to further improve the line.  In early March Oerlikon announced that it was being sold to TEL, a leading semiconductor equipment supplier from Japan. 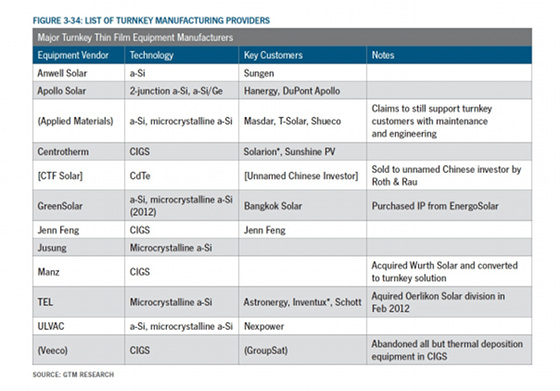 A chart showing all the players in the thin-film solar equipment manufacturing business is above. It comes courtesy of GTM Research’s “THIN FILM 2012–2016: Technologies, Markets and Strategies for Survival.”

In Part 2, we’ll talk with First Solar and Solar Frontier and take a look at the overall industry outlook for thin-film solar technology.