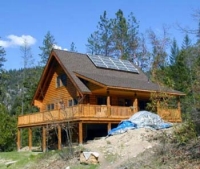 Olympia, Washington [Seattle Post-Intelligencer – July 11] Solar pioneers who have been feeding electricity into the Northwest power grid have until July 31 to apply for retroactive incentives under the state’s newest alternative-energy law. The law provides a payment of 15 cents for every kilowatt-hour of electricity that backyard producers have sent into the grid.

The incentive program extends to June 30, 2014, and is retroactive to July 1, 2005. But retroactive payments must be applied for by the end of the month, state Revenue Department specialist Mark Bohe said. “People will get their money,” he said, “but only if they know to apply for it, and then apply for it now.” By comparison, Puget Sound Energy and Seattle City Light charge about 5 cents per kilowatt-hour as a basic rate, then boost the rate to about 8 cents per kilowatt-hour. The enabling legislation for the incentives, described by primary sponsor Sen. Erik Poulsen, D-West Seattle, as “the most progressive in America,” was passed last year, but has been tied up in the rule-making process until this month. Under the new program, utility companies will take a tax credit for the money they pay to small electrical producers. The new program also will allow those who adopt alternative-energy systems for their roofs and backyards to justify their investments sooner than before. Until now, a $20,000 photovoltaic system needed several decades to realize a “payback” date. Beginning Aug. 1, backyard producers of the future will be able to earn kilowatt-hour money if they install equipment manufactured in this state. To help that along, the new law offers tax incentives to manufacturers. “This finally makes solar a viable investment for the little guy, which is how I’ve always looked at it — as a capital investment,” said Mike Nelson, director of the solar program for Washington State University Extension. “It’s always cheaper to rent than to buy,” Nelson said. “If you buy, when the thing is paid off, you own a capital asset, and when I tell people this, I always like to point to the first photovoltaic system built by Bell Labs in 1954. It’s still operating — at the National Renewable Energy Lab in Golden, Colorado.” At the federal level last year, Congress said individuals who install equipment by 2007 will be eligible for a federal tax credit worth 30 percent of the cost, to a limit of $2,000 for individuals, but with no limit for small businesses — a federal first since incentives established during the Carter administration dried up 20 years ago. Already on the state’s books are laws forgiving the state sales tax on the purchase and installation of alternative-energy equipment and a law that requires “net metering” of independently produced energy. “Net metering” is when energy produced on one’s roof spins the meter backward. “Money talks,” Poulsen said. “When people try to decide whether or not to install a system in their home, these payments should make a difference. They are the most progressive renewable incentives ever passed in America and the model that made Japan and Germany the world’s leaders in renewable energy.” “Very broadly,” he added, “it means ordinary people can produce their own power. It’s good for the planet, and it’s great for the utilities because it means they don’t have to build new dams or new gas plants that pollute.” For further information on the specific rules to the measure, a link to download an incentive application, and to certify your existing system, visit the original story link at the Seattle Post-Intelligencer. This article reprinted in full on RenewableEnergyAccess.com with permission from the Seattle Post-Intelligencer.