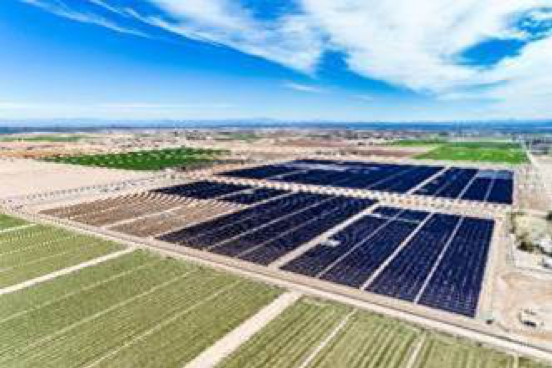 Salt River Project (SRP) this week announced that it plans to add 1,000 MW of new utility-scale solar energy to its system by the end of fiscal year 2025, accelerating the pace of development and total solar capacity that it had previously announced by 700 MW.

SRP’s CEO and GM Mike Hummel said that economics and a grid study have contributed to its decision to up the utility’s investment in solar capacity.

According to Hummel, the costs for solar energy continue to decrease – making this the right time to increase investments.  In addition, a recent study has determined that SRP’s grid is prepared to reliably handle the addition of 1,000 MW of solar power.

“Over the past several months, we have had discussions with residential customers and many of our larger commercial, industrial and municipal customers regarding their needs for sustainable resources.  Several customers have asked us to work with them on providing resource options that help them achieve their goals,” said Hummel in a press release.

SRP made headlines in 2015, when then-SolarCity (now Tesla) sued the utility for imposing “unfair fees” on homeowners that installed rooftop solar.

SRP will add approximately 200 MW of new solar annually through 2025, which will allow for careful analysis of the impact to the reliability of SRP’s electrical grid and provide valuable operational experience, it said.

SRP will examine programs to allocate the new solar capacity to various customer groups, including community solar for residential customers.

According to Hummel, SRP will focus on strategic locations for the new solar capacity that will provide maximum efficiencies and reliability benefits while best meeting customer growth.

The 1,000 MW of solar energy SRP will add by 2025 is in addition to SRP’s 200 MW of existing solar resources that include several large-scale Valley-based solar energy facilities, more than 50 MW of solar on Navajo land, a 20 MW solar / 10 MW battery storage power plant located in Pinal County, and 25 MW and 10 MW battery storage facilities in development in the Phoenix metropolitan area.

By the end of FY 2025, SRP will have a total of more than 1,200 MW of solar energy capacity and will be looking to install additional battery capacity to complement the solar energy, Hummel said.

SRP is a community-based, not-for-profit public power utility and the largest provider of electricity in the greater Phoenix metropolitan area, serving more than 1 million customers. SRP also is the metropolitan area’s largest supplier of water, delivering about 800,000 acre-feet annually to municipal, urban and agricultural water users.

A session that looks at “How Low Will Solar Pricing Go” will be presented at the upcoming POWER-GEN International, set to hit Orlando, Florida, December 4-6, 2018.