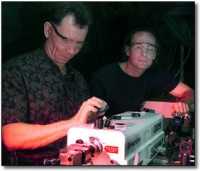 The same national lab largely responsible for mankind’s ability to harness atomic power may be on the cusp of economically harnessing the power of the greatest nearby nuclear device of all – the sun. University of California scientists working at Los Alamos National Laboratory have experimentally demonstrated a phenomenon in which semiconductor nanocrystals respond to photons by producing multiple electrons. The innovation has potential applications in a new generation of solar cells that would produce as much as 35 percent more electrical output than current solar cells.

Los Alamos, New Mexico – May 10, 2004 [SolarAccess.com] In a paper published in the journal Physical Review Letters, Laboratory scientists Richard Schaller and Victor Klimov describe their observations of high efficiency carrier multiplication in nanoparticles of less than 10 nanometers in diameter made from lead and selenium (PbSe nanocrystals). Upon illumination with light at the green-blue end of the spectrum, these nanocrystals react to absorbing solar photons by producing twice the electrons of conventional bulk semiconductors through a process known as carrier multiplication. This increase in the number of electrons being produced can lead to a greater electrical current output from solar cells. The basic operation of solar cells has essentially remained unchanged over the past four decades — the absorption of a photon by the solar cell material generates a single exciton (a bound state of a negatively charged electron and a positively charged hole), which undergoes charge separation and produces electrical current. Traditionally, the single photon produces only one exciton. The rest of the photon’s energy is lost as heat. Over the decades, scientists have proposed various methods for improving the efficiency of solar panels, including a method called carrier multiplication. Carrier multiplication was discovered in the 1950s, but has always been considered a very inefficient method for solar energy conversion since it produced, at best, an increase in solar energy conversion efficiency of less than 1 percent. Los Alamos scientists have demonstrated that the use of nanoscale semiconductor particles can greatly improve the efficiency of carrier multiplication through a significant enhancement of the effect called impact ionization. Impact ionization is a process where an exciton, created in a semiconductor by absorbing a photon, transfers the excess energy that would normally have been lost as heat to another electron. The result of this energy transfer process is that two excitons are formed for one absorbed photon. Although the Los Alamos scientists have not yet built a working PbSe nanocrystal solar cell, they are the first to demonstrate the ability to use impact ionization to generate more excitons and hence a greater electrical current in the solar cell configuration. Schaller and Klimov are researchers in the Physical Chemistry and Applied Spectroscopy group of the Laboratory’s Chemistry Division. For more information on their work, go to the following link.