New Hampshire, U.S.A. — The volatile swings seen in the upstream part of the solar PV supply chain, from silicon to cell/module pricing, have been well documented. End-market demand and associated policies supporting it is also a roller coaster, with many key regions currently embroiled in what to do for 2012 and beyond.

Meanwhile, downstream sectors in the solar PV supply chain — those involved with financing, development, and installation — represent the final step in monetizing a solar PV project. Firms in this universe have created a fragmentation of pockets of niche specialists in key areas vs. full turnkey integrators (read: high-margin businesses), which also helps insulate against that upstream sturm und drang.

Investors — both VC and firms seeking expansion via M&A — are paying more attention to the downstream side of the industry (see graphic below), seeking to spawn more innovation and leaner business models. Downstream start-ups, led by SolarCity, SunRun, Recurrent Energy, SunEdison, and Solar Power Partners, have raised over $1 billion. (Note that Solyndra raised a billion on its own, in headier times for all involved.) This is “setting up a battle between cleantech industrialists and general contractors/self-funded construction industry veterans,” Lux Research claims in a new study.

Conclusions from the study are bracketed into three categories of developers and installers: 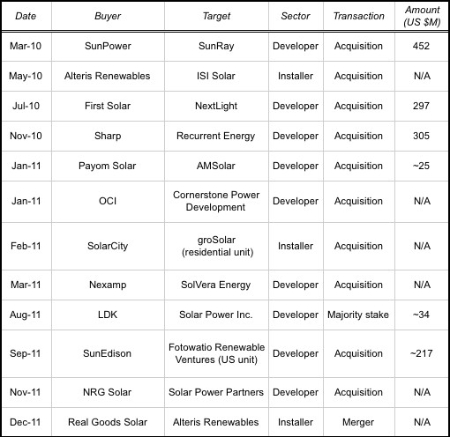