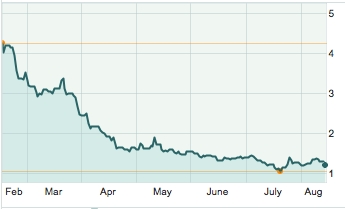 SolarWorld AG, Germany’s largest solar-panel maker, dropped the most in almost four months in Frankfurt trading after posting its second-biggest quarterly loss and forecasting negative earnings for the year.

SolarWorld fell 11 percent, the biggest intraday decline since April 18, to trade at 1.174 euros as of 10:07 a.m. local time. The company reported a net loss of 161 million euros ($198 million) last quarter, larger only than its 312.7 million-euro loss in the fourth quarter of last year.

“The results are way below expectations,” Sven Kuerten, an analyst at DZ Bank AG who has a sell rating on the stock, said in an e-mailed note.

The company is leading a push by about 25 European manufacturers for a European Commission probe into Chinese rivals, alleging they sold products at a loss on regional markets. Solarworld forecast negative earnings before interest and taxes for the full year, citing an “aggressive market situation characterized by illegal trade practices.”

SolarWorld will invest 50 million euros in new products as it seeks to “fight price dumping with technological innovations,” Chief Executive Officer Frank Asbeck said in a statement. The Bonn-based company reported a 36 percent slump in sales in the first half from a year earlier.

The call for a European investigation into Chinese practices follows a similar probe in the U.S., which proposed anti-dumping duties ranging from 31 percent to 250 percent after ruling in May that Chinese solar manufacturers sold products below cost.