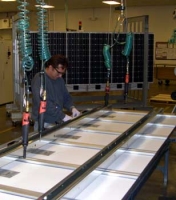 Munich, Germany [RenewableEnergyAccess.com] One of the most significant reshufflings in the global solar photovoltaic (PV) market in years occurred this week with Germany’s SolarWorld announcing they would acquire all of Royal Dutch Shell’s solar crystalline operations. Approximately 80 MW of solar PV module production will be shifted over to SolarWorld, a move the company says will make it the largest producer of PV in the U.S.

News of the deal comes just one a day after President George W. Bush announced a modest, yet broad package of energy initiatives which includes a proposal for the largest increase in Department of Energy (DOE) funding for solar photovoltaic technologies in the department’s history. It also follows the narrow passage weeks ago of a massive solar rebate plan in California that is expected to stabilize a fertile solar business climate in the important California market. “In view of the recently launched comprehensive funding program in California, the SolarWorld Group will benefit from excellent growth opportunities with this expansion, creating a global ‘SolarWorld’ with production and sales representation in the most vigorously growing solar markets worldwide”, Frank H. Asbeck, Chairman and CEO of SolarWorld AG. With this additional 80 MW of capacity, SolarWorld says this will make them the largest producer of solar modules in the US. The sale and purchase agreement signed by both parties results in the transfer of the following Shell locations: Vancouver, Washington and Camarillo, California, which manufacture solar silicon crystals, wafers, cells and modules, Gelsenkirchen, Germany, which produces solar cells, as well as the sales companies in Munich, Germany, Singapore and South Africa and the research and development team focusing on silicon technology based in Munich, Germany. The Shell Solar Rural business is not included in the transaction, which will still need to be approved by regulators. The companies also agreed not to disclose the financial conditions of the deal. In Camarillo, California the Shell Group operates an integrated wafer, cell and module production facility that will in future be run by SolarWorld AG under the name SolarWorld Industries. In Vancouver/Washington, in the Northwest of the USA, there is an additional production facility for mono-crystalline solar silicon ingots. SolarWorld AG expects to continue to employ the 575 Shell staff and coupled the purchase plan with a one-year employment guarantee for all staff. “We assume that capacity utilization in the new factories will go up continuously and that by the end of the relative raw material scarcity in 2008 the majority of the employment contracts will be secure,” Asbeck said. “Since our establishment in the year 1998 we have consistently added new staff. We want to keep it that way.” Citing the tight global market solar solar-grade silicon raw material, Asbeck expects lower overall production at the U.S. facilities in the short term with full capacity not coming online until 2007/2008. Asbeck says SolarWorld’s acquistion of Shell Solar reflects a pattern of consolidation in the solar PV industry that has been emerging for some time. But, he added that this could be one of the last major mergers in the international market for “the foreseeable future.” “The other big international players are firmly in place,” Asbeck said. “Big corporations with a lot of capital clout are behind them. From today’s point of view it is difficult to imagine that one of these large players might disappear from the market through a take-over”. On the other hand, he said, consolidations and takeovers in the segments that require less capital and know-how of the solar power market, like solar cell and solar module production, were likely as well as in the field of trading and Research & Development companies. In an unrelated, but similarly important note, merger note, Spain’s Acciona Group announced plans today to buy a controlling interest in Solargenix of Raleigh, NC, which specializes in both residential and commercial-scale solar thermal. The next two links to Reuters and the Associated Press cover both the SolarWorld / Shell merger and the Acciona / Solargenix news.