Washington, D.C. United States [Renewable Energy World magazine] Tracking solar electricity projects is a difficult task for a highly decentralized and distributed renewable technology. In the United States, photovoltaic (PV) and concentrating solar thermal electric (more commonly known as concentrating solar thermal power, or CSP) systems ranging from 100 watts to 64 MW are interconnected to the grid operating on both the demand-side (customer) and supply-side (utility) of the meter. Over 18,000 separate PV systems were installed in 2008 alone.

Even the most basic aggregated data on these systems — the number of installed systems and their installed capacity — are fragmented and hard to acquire from sources including state governments, private researchers and consultants, and electric utilities. At best, there are probably fewer than 10 market analysts who can act as an original source for collecting and collating US data into a national picture, and most of the resulting data are not in the public domain.

However, in 2008, the Solar Electric Power Association (SEPA) published its first annual ‘Top Ten Utility Solar Integration Rankings’ report, which surveyed and ranked U.S. electric utilities on the cumulative amount of solar electricity integrated into their service territories through to the end of 2007. Integration of solar includes utility, customer or third-party ownership, and connection on either side of the meter. Rather than showing an aggregated national or a state-level amount of solar capacity, the report presents the data in an entirely new way — by electric utility.

In last year’s report based on 2007 data, Southern California Edison (SCE) and Pacific Gas & Electric (PG&E), both based in California, ranked first and second for the most solar electric MW of capacity installed in the U.S., though for different reasons. SCE has long-term contracts with 354 MW of centralized CSP plants in southern California, installed in the 1980s and early 1990s, while PG&E is the U.S. leader for the integration of distributed customer-sited PV systems. When standardized by the number of customers, SCE was again number one with 74 watts per customer and NV Energy, a Nevada utility, was second with 58 watts per customer, similarly because of a large CSP contract.

In May 2009, SEPA released its second annual ‘Top Ten Utility Solar Integration Rankings’ report encompassing data through to the end of 2008, and which hightlights both significant growth and the many new project developments in the utility solar landscape. Many of the ranked utilities in this year’s report are familiar national names in the solar industry, having integrated hundreds or thousands of customer-sited PV systems. Some have also recently announced significant multi-megawatt project developments or contracts with third-party solar providers. Other utilities, however, are only locally or regionally known, but, given the scope of their solar programmes relative to the size of their customer base, are making significant solar contributions in their own right.

The 2009 report details both the annual and cumulative installed solar electricity capacity by participating US electric utilities. The survey covered over 500 utilities based on known solar activities, utility size, location, and other factors. Annual solar capacity includes both PV and CSP technologies interconnected during 2008 (although no CSP was interconnected in 2008), while cumulative data includes all operational solar facilities through to the end of 2008, including prior years (which does include CSP data). PV technologies are de-rated 80% across the board from the DC nameplate system capacity, so all data represents AC grid capacity.

In addition to overall rankings, the data are broken down by which side of the meter the development is and by utility type, similar to last year’s report, but also by region within the US, which is new this year. The report also outlines a database of centralized solar project announcements made by utilities and solar developers, which have the potential to significantly redistribute the rankings in future years.

In 2008, no U.S. utility integrated more solar electricity than Pacific Gas and Electric (PG&E), based in San Francisco, California. PG&E connected 85 MW of capacity, nearly all of which was demand-side (net metered) distributed PV projects located on customer rooftops and property. The significance of this growth for one utility in one year, and the industry in general, is difficult to overstate. PG&E installed more in 2008 than the entire United States did in 2006.

Two southern Californian utilities, Southern California Edison (SCE) and San Diego Gas and Electric (SDG&E), were ranked second and third in the U.S., installing 32 MW and 16 MW respectively, completing a clean sweep of the top three spots by California investor-owned utilities. However, Public Service of Colorado (an Xcel Energy subsidiary) placed a close fourth with 14 MW, showing significant growth for a non-California utility. Overall, the top ten utilities were located in seven different states, largely in the West, and represented 88% of the survey’s solar megawatts, which is a high concentration, but which is lower than the cumulative total from the previous year.

When the annual rankings were standardized by the number of customers per utility, the San Francisco Public Utilities Commission (SFPUC), a California water utility serving a few hundred municipal accounts with several larger PV systems, was a clear outlier with almost 2.7 kW per customer. Second and third were Kauai Island Utility Cooperative, a Hawaiian utility, with 47 watts per customer, and Palo Alto Utilities, a California municipal utility, with 44 watts per customer.

Both are public power utilities, which are not rate-regulated by state governments and tend to be smaller in size. Maui Electric Company, also in Hawaii, was fourth with 33 watts per customer, followed by PG&E in fifth place with 16 watts per customer, showing their strong solar investment to size ratio. The solar watts per customer ranking was dominated almost entirely by utilities from California and Hawaii; the lone exception was Black Hills Energy in Colorado.

On a cumulative basis, SCE was once again the number one utility for the most solar MW installed with over 440 MW, largely due to their CSP contracts. Interestingly, they would still be ranked second without these contracts from the large amount of distributed PV installed by customers in their territory. PG&E was ranked second, Nevada Energy third, SDG&E fourth and Public Service of Colorado fifth. In this cumulative category, ranked utilities were from six different states and represented 94% of the surveyed total, a slight decline from 2007, but still highly concentrated.

When standardized by utility size, the SFPUC was again an outlier and ranked first with over 4.7 kW per customer, while the Port of Oakland, a similarly unique utility, was ranked second with over 3.4 kW per customer. For more traditional utilities, SCE was ranked third with over 90 watts per customer and Kauai Island Co-op and Palo Alto Utilities rounded out the top five. This category had a similar concentration in California and Hawaiian utilities, with NV Energy being the lone exception.

In addition to the survey of utility solar integration, SEPA maintains a database of large solar electric project announcements by utilities. Many of these projects are utility driven, meaning the utility announced and is managing the project either through direct ownership or a request for proposals process. This is one of the biggest changes in the last 12 months — utilities are beginning to assess and influence solar markets moving forward at an unprecedented scale. The outcomes of these projects will significantly affect utilities’ solar portfolios and ultimately their integration rankings.

According to SEPA’s research, there are announcements of large solar project above 5 MW in 14 states, divided across both PV and CSP technologies, though the latter makes up a significantly larger number of MW.

It is important to note that not all of the projects will be built as announced, if at all. There are financing, permitting and other risks to project development that will make a number of these announcements suspect to changes, delays or cancellations — especially given the economic conditions of late. However, given that the full list is well over 6 GW of installed (AC grid capacity) over the next five years — see Table 1 below — with additional announcements certainly forthcoming, the solar industry and utility integration of solar will see significant growth regardless of these risks and those projects which inevitably will fall by the wayside. 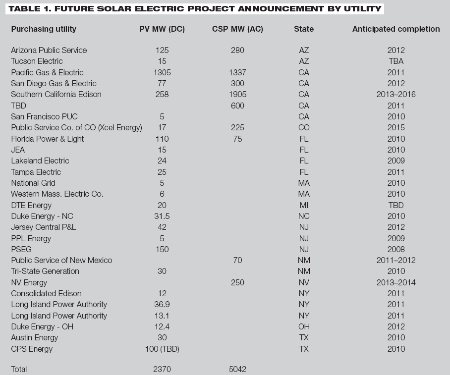 Meanwhile, a few patterns have emerged in the data that casts light on utility solar development in the years to come. First, large, centralized CSP projects — and to some extent PV — greater than 50 MW are becoming increasingly common. Their installation and integration will significantly change the solar landscape in the U.S. on a scale and impact that is approaching equivalency to traditional power plants.

While thermal storage is largely an uncommon component for CSP projects, its addition is key to CSP providing direct and equivalent benefits to intermediate natural gas peaking plants. CSP will no longer be just an energy solution, but also a capacity solution, a value which utilities strongly favour. Permitting and grid integration of these centralized projects will also be a challenge moving forward — a large number of these projects are located on federal lands, and navigating the approvals process will be difficult.

Ensuring that transmission capacity is available is another consideration. Several stakeholder groups are working on streamlining and addressing these issues through transmission and renewable energy zone initiatives and studies. Renewable energy zones are pre-designated regional areas that can focus the confluence of project siting and permitting with that of transmission development to reduce the transaction costs and attempt to consolidate resources and efforts.

Second, utilities are beginning to investigate ownership of solar assets. In October 2008, the federal solar investment tax credit was renewed and extended for eight years, and included a provision that allows investor-owned utilities to now monetize the tax credits. To date, utility ownership of centralized PV and CSP projects has been limited, Florida Power and Light a noted exception. But a number of utilities have announced, and are implementing, a ‘distributed solar power plant’ business model, whereby the utility owns and operates an aggregated portfolio of PV systems up to 2 MW that are located on customer rooftops and property. These building and property owners receive a small revenue stream from a lease, much like a farmer does for hosting wind turbines. 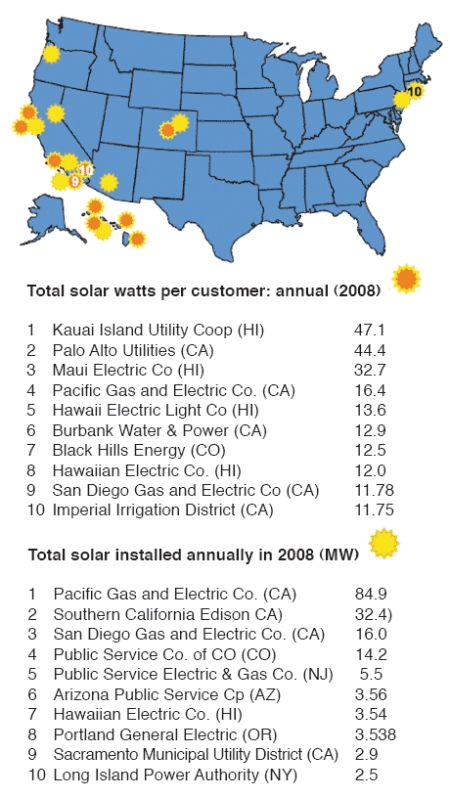 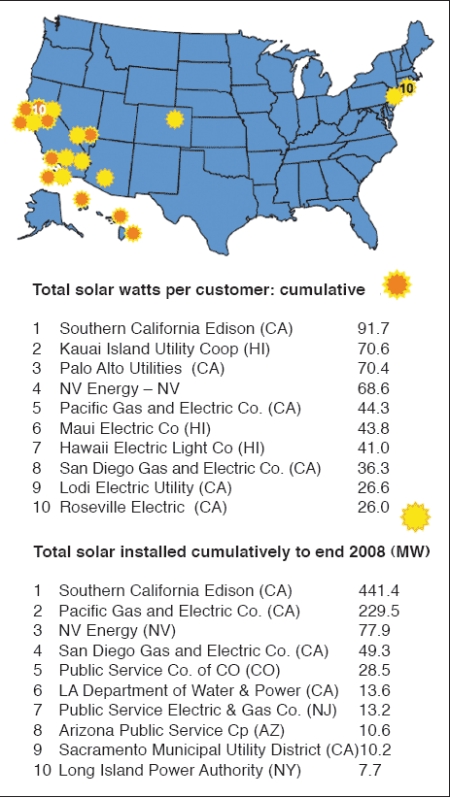 Projects ranging from a few megawatts up to 500 MW have been announced and are making their way through the approvals processes with state government regulators.

One issue related to the tax credit is that of ‘normalization,’ which requires utilities to distribute the tax benefits across the life of the project (any project, not just solar), so that all ratepayers can benefit over time, and not just ratepayers during the tax window. While not a deal-breaker, it is a consideration that puts utilities at a slight disadvantage when considering ownership, relative to a private developer who can utilize the tax credits outright more immediately.

Third, and perhaps most importantly, the list of future announcements is a preliminary snapshot into the future. Utilities are feeling out the solar space, making calculated project and programme announcements based on economics, their internal risk tolerances, state regulatory policies and other motivating factors. Much as 1 MW projects have become commonplace today, but were significant five years ago, utility-driven — and owned — solar projects will likely move in a similar pattern, creating new thresholds for investment. A number of 10–100 MW projects have been announced lately, while those greater than 100 MW are still the exception. That will no doubt change as today’s announced projects become reality and new, larger announcements take their place.

Mike Taylor is director of Research and Education at the Solar Electric Power Association (SEPA).