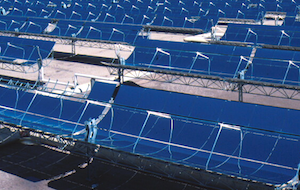 SolarReserve’s 150-MW solar thermal power plant has been granted development approval by the South Australian Government, paving the way for construction to begin this year.

The Aurora Solar Energy Project located in Port Augusta, about 300km north of the South Australian capital Adelaide, will incorporate eight hours of storage or 1100 MWh, allowing it to operate like a conventional coal or gas power station.

The AU$650 million plant — the biggest of its kind in the world — will have a capacity of about 135MW under normal operating conditions with the ability to increase that output in favorable conditions.

The plant will be situated about 150km northwest of Jamestown, where Elon Musk has installed the world’s largest Lithium-ion battery at Hornsdale Wind Farm.

It will supply 100 percent of the South Australian Government’s electricity load from 2020, after it won a competitive tender process.

In September 2016, the South Australian Government launched a tender process to procure 75 percent of its long-term power supply in order to attract a new competitor into the electricity market.

The offer from SolarReserve was the lowest-cost option of the shortlisted bids, with the government paying no more than AU$78/MWh.

The project is a big win for the Port Augusta community, which is still recovering from the 2016 closure of a major coal-fired power station in the town.

“The remarkable story of the transition of Port Augusta from coal to renewable energy — which won a competitive tender against fossil fuel — is also a preview of the future of power generation around the world,” he said.

The project will use thousands of mirrors (heliostats) to reflect and concentrate sunlight onto a central receiver on top of a tower. The process heats molten salt, pumped to the top of the tower and flowing through the receiver, to 565 degrees Celsius.

The molten salt provides a stored heat source that is used to generate steam to drive a single turbine that generates electricity. The facility can generate power at full load for up to eight hours after sunset.

“This world-leading project will deliver clean, dispatchable renewable energy to supply our electrified rail, hospitals, schools and other major government buildings,” he said. “South Australia is fast becoming a global center for the development of renewable energy with storage, with a range of other projects set to come online over the next few years.”

This article was originally published by The Lead South Australia here under a Creative Commons license.