On December 13-14, 2011, a partnered team from Illinois Institute of Technology, Green Wifi, and Inveneo worked together to bring solar-powered Internet connectivity to the EFACAP school in Lascahobas, Haiti. Thanks to funding from an Internet Society Community grant, this team first established a long distance Internet connection to the school, and then set up point-to-multipoint WiFi hotspots across the school’s campus. 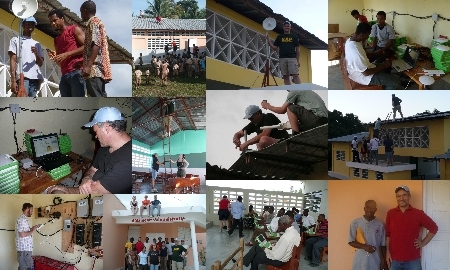 In August, 2011, the IIT and Green WiFi team installed a 2.4-kW DC-only solar PV powering system at the EFACAP school, to provide power for donated laptops that the school had no way to charge. Now that the laptops could be charged and used, the team’s next goal was to establish an Internet connection for the teachers, students, and administration. This would enable those at the school in Lascahobas to communicate with the team in the U.S. From the beginning of this project, one of our goals has been to enable communication and collaboration between the two groups. 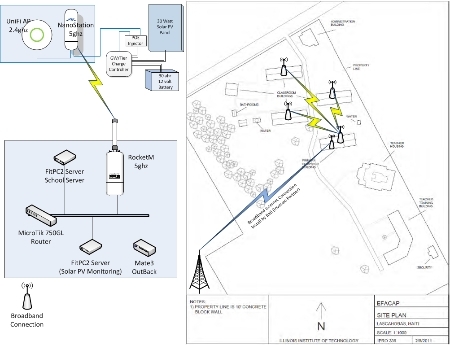 The team first established a long-distance link from a communications tower in downtown Lascahobas to the (semi-rural) EFACAP school. The equipment supporting the long-distance connection — a Ubiquiti RocketM base station, MicroTik router, two FitPC2 servers, and a UniFi nanostation and WiFi antenna — is all powered from the direct current solar system the team set up in August. Once the long-distance link to the school was functional, the team set up multiple point-to-multipoint solar-powered WiFi hotspots across the school’s campus, each consisting of a 30 watt solar panel powering a charge controller, and a UniFi nanostation and WiFi antenna.

After connectivity was established, the IIT team met with the school’s teachers, only two of whom had ever used the Internet before, to instruct them in how to get online, use search tools and a server, and finally, to set up email addresses! 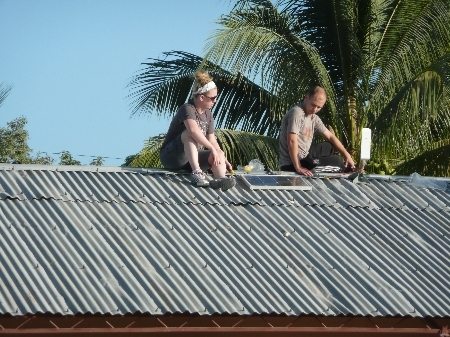 The backbone communications tower in Lascahobas, to which the EFACAP school is connected, is one of many set up across the country as part of the Inveneo-led Rural Broadband Initiative to form a high-speed wireless backbone across Haiti. This initiative’s objective is to bring affordable, reliable and sustainable broadband access to six regions and 20 un-served population centers across Haiti. The Internet Society grant, which enabled our team to leverage the commitment of a two-year anchor tenant contract with the EFACAP school, was a contributing factor toward the Rural Broadband Initiative’s decision to place Internet towers in this region, thereby including it in the national backbone, which means that this grant’s potential reach and contribution to Internet connectivity and use in Haiti go far beyond the single connection at the EFACAP school!

As part of their BATI program, Inveneo is training and certifying local Haitian technicians from regions across the country in Internet connectivity setup and related small-business skills. The EFACAP school Internet installation was used as a hands-on training session for five BATI technicians.

Our team looks forward to returning to the school in the first half of 2012. While we are confident that the Inveneo BATI team is capable of installing, supporting and maintaining the Internet and related connectivity technology, our team plans to host a training session (for the BATI and beyond) focusing on solar power technology and WiFi technology so they can be locally supported and maintained. With each visit, we are working to increase local capacities, as well as local support for the project so that it can be fully locally owned, maintained, and supported.