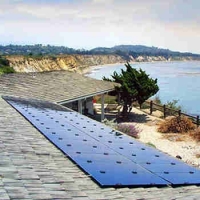 New Hampshire, United States [RenewableEnergyWorld.com] As the credit crunch was starting to loosen earlier this year, one of the first glimmers of hope came from the solar energy space. In June, SolarCity and U.S. Bancorp Community Development Corporation (USBCDC) formed a partnership to finance small- and medium-scale solar projects for homeowners and businesses across the U.S. The two companies created a new US $50 million tax-equity based fund to finance projects under SolarCity’s SolarLease program.

The program, which was originally backed by Morgan Stanley, allows homeowners and businesses to purchase power from systems owned and installed by SolarCity through a power purchase agreement (PPA). SolarCity, the system owner, takes advantage of commercial tax credits that it then applies to customer financing.

The USBCDC fund was one of only two tax-equity funds closed in the U.S. during the first half of 2009 that applied to residential solar projects — and both of the funds were created with SolarCity to finance solar installations.

“Tax equity financing has been the primary constraint on the growth of the solar industry, so we’re obviously thrilled and very grateful to U.S. Bank,” said Lyndon Rive, CEO of SolarCity when the fund was first announced. “This fund will allow us to increase our installation throughput and hire more installers to keep pace with strong demand from American businesses and homeowners for affordable, clean solar power.”

SolarCity believes that its business model was the foremost driver in the process of getting the deal with USBCDC closed.

The company said that despite the fact that virtually every solar company in the country was looking to U.S. Bank for financing, SolarCity was chosen for three key reasons: it top quality products, its commitment to customer service and the equity that solar adds to residential and commercial real estate.

Rive said making sure these areas of a company’s business are strong is the best strategy to be on the radar of financiers in the still difficult economy.

“Prove yourself, make sure you are profitable and execute. It’s not about who you know, it’s about what you’ve done. The companies with the best operational track record will be the first in line to get financing,” Rive said.

Earlier this fall, SolarCity and USBCDC doubled the size of the fund to $100 million.

“Following the pilot U.S. Bank fund earlier this year, both parties were interested in continuing and expanding the relationship — SolarCity’s customer demand and operational capacity have been growing so quickly that we agreed to double the portfolio size just four months after we created the initial fund. Also, our U.S. Bank fund is unusually versatile in that it can finance both residential- and commercial-scale installations, whereas some investors are interested in one type of project or the other,” Rive said.

Since the expansion, SolarCity has announced the availability of its SolarLease program to customers of Los Angeles Department of Water and Power (LADWP), the nation’s largest municipal utility. The company has also announced a new residential solar service in Oregon. SolarCity’s PurePower program allows homeowners to pay the same rate they were previously paying for electricity from the utility company. PurePower pricing for a 3.5-kilowatt solar system in Oregon, appropriate for a typical three or four-bedroom home, starts at $30/month.

The expansion of the U.S. Bank fund has allowed the company to grow operations substantially to meet increasing demand. SolarCity has hired 140 people in the last 5 months and passed the 4,500-customer mark.

Rive said that SolarCity’s growth is part of a wider trend in the PPA market that is taking place because of the market it serves.

“The market that we’re addressing is the retail electricity market. So every rooftop out there is a potential for solar. The electricity industry is massive, so in our lifetimes, at least the next 20 or 30 years we are not going to come close to market saturation,” Rive said.

USBCDC, one of the nation’s largest tax-credit investors, solely makes investments in tax-credit equity and the Investment Tax Credit (ITC) is an extension of the group’s long-time experience in the New Markets and Historic tax credit programs, according to Tina Lin of USDCDC’s Historic, New Markets & Solar Tax Credit Investments group.

Lin also said that the group is not currently taking advantage of the Production Tax Credit (PTC) and its primary focus for renewable energy technologies is on utility-scale solar and wind turbine projects.

“We started investing in the ITC at the beginning of 2008 and have closed 10 solar-based transactions, almost all over a 1 MW in size. Within solar, we’ve invested in commercial/industrial installations, residential programs as well as funds. Projects have used both crystalline panels and thin-film technology,” Lin said.

The structures of USBCDC’s tax equity fund deals run the gamut from direct investment, partnership flip models, lease pass-through to sale lease-back structures. USBCDC’s return on investment comes primarily from the tax credits themselves so most funds they create with solar companies have short investment horizons, generally just 5 years, however most transactions are entered into with the goal of doing more business in the future.

Lin said the group’s goal is to create a diverse portfolio of product types and structures while becoming an industry leader as an equity source.

Since the closing of this deal, major changes have taken place in the solar finance space. None larger than the cash grant in lieu of ITC provision of the American Recovery and Reinvestment Act becoming an option for developers. As these funds continue to be released and as the economy in general recovers more players will be back in the solar financial picture, but Rive said that may not last unless the provision is extended.

“The conversion of the ITC to a cash grant has really improved the tax-equity market, and we are starting to see many new investors enter this space because of that. It’s very important that the cash grants get extended through 2012. This will give new investors time to understand solar investments,” he said.