Massachusetts, USA — Nearly one year after SolarCity acquired Zep Solar and its rackless mounting design for $158 million — a move that cut both cost and time for residential solar installations — the installer announced today that it is whetting its appetite in untapped areas of the commercial market with a new Zep product line. 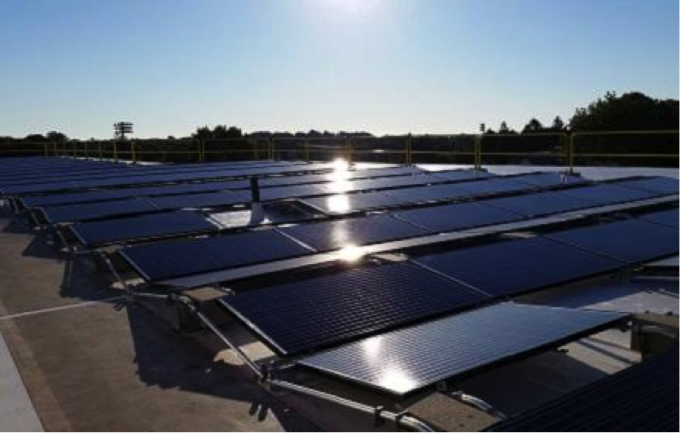 The Zep residential mounting design simplifies the installation process with interlocking, “snap together” frames and special components that drastically cut installation time from two to three days to about four to five hours, which contributes to lower costs and better service, according to the company.

Last year, SolarCity’s Chief Operating Officer Tanguy Serra told REW that the installer was pushing to break into the commercial space with a non-penetrating mounting component, and they have done just that with the ZS Peak system.

ZS Peak uses the same interlocking design as its residential counterpart and is installed in an east-west layout. According to SolarCity, this allows for 20 to 50 percent more panels on each flat roof, covering a much larger potion of the building’s energy demand. Its east-west orientation, rather than a typical south-facing layout, captures energy during peak production hours throughout a larger portion of the day. This helps to reduce energy spikes midday, which makes more efficient use of the inverters, according to the company.

Recent studies have found that west-facing panels can increase late-day production by up to 50 percent and arguably produce the most “usable” energy since it is produced during peak hours when energy consumption increases.  The California Energy Commission is even calling for 15 percent higher rebates for these peak-shaving panels.

Snagging more commercial clients would be a huge step forward for the company, said Molly Canales of SolarCity. “This new commercial product will allow us to expand even more. There is a demand for warehouse buildings with roofs that don’t bear a lot of load. Addressing that market with this lightweight product will open a lot of opportunities.”

SolarCity is installing its first project with ZS Peak this month on a city building in Quincy, Mass. and expects to ramp up installations starting in January.