More
Home Solar Solar Voyage: Around the World in 584 Days

New Hampshire, USA — It came much more quickly than the three years it took the Ferdinand Magellan expedition, but not nearly as fast as the 80 days it took Jules Verne’s fictitious Phileas Fogg.

On Friday, the world’s first around-the-world solar expedition pulled into Monaco, completing its historic journey in 584 days. But the bigger number was the zero ounces of fuel needed to power the 31-meter-long PlanetSolar.

The catamaran has a solar PV surface area that covers more than 530 square meters with a capacity of 93.5 kilowatts. That onboard power has been enough to lead the crew from Monaco through the Straight of Gibraltar, past Cuba, to Miami and Mexico, through the Panama Canal, across the span of the Pacific, to the eastern coast of Australia, up through Southeast Asia to Hong Kong, westward to the southern tip of India, into the Gulf of Iman, back down and into the Red Sea, where it crossed through the Suez Canal and back into the home waters of the Mediterranean.

The final leg of the trip ended Friday as the five-member onboard crew was met by a throng of international reporters and boating enthusiasts. Swiss adventurer Raphael Domjan took center stage amid the glitz of Monaco as he spoke about the journey, the idea he hatched in 2004, how it ultimately came together and how his expedition offers further proof of the viability of solar power for applications never thought possible.

Read blogs, watch video or view photos from many of the stops along its historic journey at PlanetSolar.org. 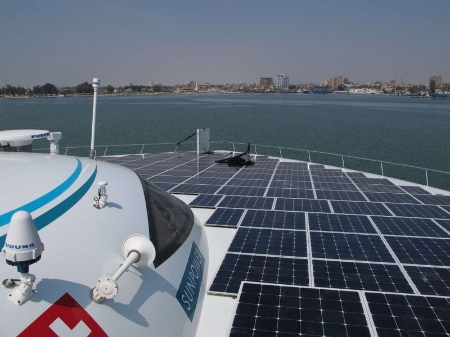