New Hampshire, USA — Project funding and merger and acquisition (M&A) activity in the solar energy sector reached record levels from July-September of this year, reflecting an improved outlook for solar demand, according to a new report from Mercom Capital Group. 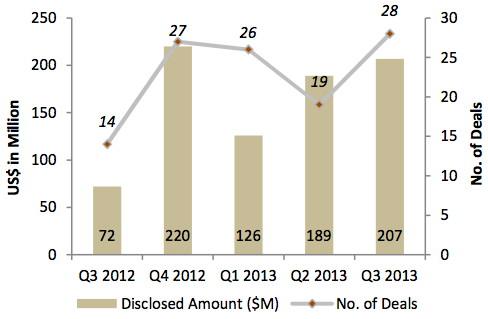 Here’s a look at some takeaway themes from 3Q13 solar funding and M&A:

The new normal is now. It’s time to stop comparing today’s levels of solar energy investment to the heady days of two or three years ago, when $400-$500 million quarters were routine and money flowed freely to solar technology developers jostled for positioning. “We’re not seeing anything over $200 million in the last 3-6 quarters,” noted Mercom CEO Raj Prabhu. “This is where we are: the new normal.”

Strategic investors are stepping up. SK Group put more money into Heliovolt. Saudi conglomerate Tasnee invested in Dyesol. Over the past year Hanergy and Hanwha have been extending their reach into solar. Big strategic partners with a ton of money continue to hedge some bets on technology, possibly where they can leverage manufacturing experience.

Solar leasing’s hot. Third-party solar finance companies raised approximately $584 million in the past quarter, with SolarCity, Sungevity, SunRun, etc. raising funds with help from banks. So far with three months to go, third-party solar leasing firms have raised roughly $2.5 billion this year, compared to just $2 billion in both 2012 and 2011. “This shows that it’s still pretty healthy out there,” Prabhu said. “Everything we’re seeing is going up.” Of course the ability to pull down lots of funding is especially important to third-party firms; it’s not just enough to raise a few million of VC or private equity funding, but they need to raise tens and hundreds of millions of dollars and put that right into rooftop installations, Prabhu pointed out. “If they’re not doing that they have a problem.”

Also noteworthy during 3Q12 was SolarCity’s acquisition of sales channel partner Paramount Solar, underscoring the importance of customer acquisition in the solar leasing model. “At the end of the day, anyone can go install” solar, Prabhu pointed out, but “the ability to go out and land the residential customers makes you unique.”

Projects are popular. Project acquisitions were the highest in three years, with around 5.5-GW of large-scale projects announced in the quarter, according to Prabhu. That generally supports industry projections of a total installed solar capacity of ~38 GW this year and 40-45 GW or more in 2014. And the projects’ locations have really spread out: “Before it used to be in the top six or seven countries,” Prabhu said, and now “we see them in Malaysia to Vietnam to the Philippines, all over the place.”

“It’s important for utility-scale projects to be really successful in the next two or three years,” Prabhu said, because they bring the costs down for the entire industry. And as costs continue to fall, developers are jumping market to market wherever they see the best returns. Right now that’s in Japan, Prabhu said; tomorrow it could very well be in Chile. “They’re playing the game, looking at market by market — it doesn’t matter where globally.”

Big solar is in the spotlight. Financing for solar, especially utility-scale projects, continues to improve. Thirty-seven large-scale project funding deals were announced in 3Q13 totaling $2.89 billion, bringing year-to-date funding deals to 106 compared with just 84 in 2012. More than half of this quarter’s 30 project acquisitions involved pure investment firms, not developers or solar companies. After the 2010-2012 financial collapse developers found it tough to get big projects financed, but now “that fear is gone,” according to Prabhu. “Solar has gotten to the next level in 2013” where to those investment firms it “looks like wind [energy]” in terms of risk, confidence around a maturing technology, and slow and steady returns for 20-25 years, he said. “Everyone in the investment community is pretty comfortable.”