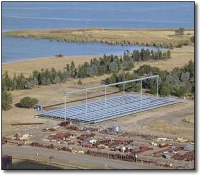 Coal and solar, who says they can’t get along? Macquarie Generation, the operator of a coal-fired power station in the Hunter valley about 250 km northwest of Sydney, Australia is tapping into a large array of solar thermal collectors that will provide clean, renewably-generated steam and feed-water for the power plant.

Sydney, Australia – July 30, 2004 [SolarAccess.com] Developers of the project, Solar Heat and Power, based jointly in Australia and Germany, believe this is the first time solar thermal power has been coupled with a conventional power plant to assist in direct operations. The first phase of the solar trough project offers a nominal thermal capacity of 1.2 MW with a planned expansion to 40 MW. Yep, 40 MW — enormous in terms of solar thermal capacity, but relatively small compared to the 2000 MW capacity of the coal-fired power plant. The technology employs what the developers call their Compact Linear Fresnel Reflector (CLFR). In this first phase, the CLFR collector field covers an area of approximately 60 x 30 meters consisting of several rows of flat mirrors that concentrate the sun’s radiation to fixed plane absorber installed about 10 meters above the field. In the absorber the sunlight heats water and produces steam at temperatures of 285 ýC. This solar generated steam is replacing steam turbine bleed steam otherwise used for the feed-water heating entering the coal-fired boiler. “The CLFR collector will produce electricity at cost cheaper than wind by utilizing the existing power plant infrastructure” the Chairman of Solar Heat and Power and long time president of the International Solar Energy Society Dr. David Mills stated. “This is why Macquarie Generation opted for this technology and awarded us with a staged contract to expand the solar field to an output suitable to produce 40 MW of clean emission-free electricity.” The developers said that with this solar thermal process, less fossil fuel is needed to generate the same amount of electricity, and in turn this reduces the total CO2 emissions of the plant. By closing the bleed steam extractions at the turbine more steam can travel trough the low pressure blading of the turbine so that the plant operator is gaining valuable additional capacity especially at times with highest load. The expansion stage to 40 MW will employ the same technology for the same use. Die-hard renewable energy fans will say it’s still a dirty coal-fired power plant, but the reality is that these conventional plants will continue to operate around the globe for many years. The developers see their solar thermal coupling as a way to cost-effectively clean up these power plants. “Adding a CLFR solar field can be an excellent and cost effective option to increase peak load possibility while reducing CO2 emissions. This could especially be interesting for some finance-lacking North African utilities operating matured plants in markets with strong growths of electricity demand “, the Managing Director of Solar Heat & Power Europe Rýdiger Wolf claims. In the coming months the CLFR field will undergo further trials. Connection of the extended CLFR solar field with about 15 MW (themal) to the power plant water/steam cycle is planned by the end of 2004. The market for solar thermal power is set to expand rapidly over the next decade with various projects planned in Australia, India, Northern Africa, America and Europe. The developers said Spain is offering especially attractive feed-in tariffs for stand alone solar thermal power plants. Solar Heat & Power’s European division is preparing for this market by planning a European manufacturing site and working on the authorization of a small show case, stand-alone solar thermal power plant in Germany.