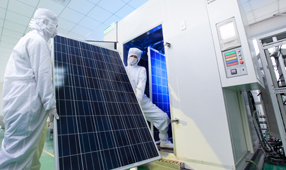 Yesterday JinkoSolar announced that it had signed an agreement to supply 1.75 GW of high efficiency modules to a U.S. counterparty. The announcement also stated that the company’s board of directors had authorized JinkoSolar to finalize planning for the construction of an advanced solar manufacturing facility in the U.S.

The source was unable to confirm Jacksonville as the location. In addition, many other details about the facility — such as whether the manufacturing plant will assemble modules or perform full-scale cell and module manufacturing — have not been finalized. Neither has the actual size of the plant.

While the timing of the announcement certainly leads one to believe that section 201 solar tariffs recently implemented by President Trump are the reason that Jinko would decide to build a U.S. solar manufacturing facility, it’s a stretch to imagine that a company the size of Jinko would be able to make a monumental decision to build a new solar factory so quickly and the source confirmed that plans have been in place for months.

However, it is likely that the scope of the project could be in flux as details such as how the tariffs will be implemented are finalized. For example, the relief states the first 2.5 GW of imported solar cells will be exempt from tariffs but the rules regarding how that 2.5 GW of solar cell capacity will be identified are not final.

Renewable Energy World will continue to update readers on U.S solar manufacturing plans as they are announced and confirmed.

Read: Supply Update: Yes, Depending on the Country, There Is a Module Shortage