More
Home Solar Solar Stocks Are Taking Off — Will They Keep It Up?

The market is starting to notice that solar investing has been extremely profitable in 2013. As of the middle of September, the average solar stock is up over 50 percent in the past year, and over 15 percent in three months (that’s over 60 percent annualized!). 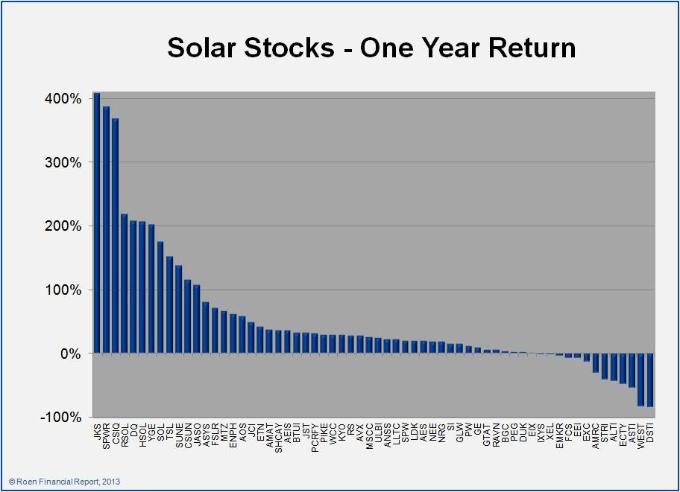 These returns are taken from a broad list of about 60 publically traded companies in the solar industry (chart at right). Though all are involved in solar, solar may not be the primary business of many of these companies. For example, Panasonic (PCRFY) produces photovoltaics, but it is only a small part of the company’s much larger consumer product focus.

To get a better sense of what is occurring in the mainstay of solar stocks, 16 companies whose primary business is solar were analyzed. In order to weed out the most speculative players, only companies with over $50 million in annual sales were included. 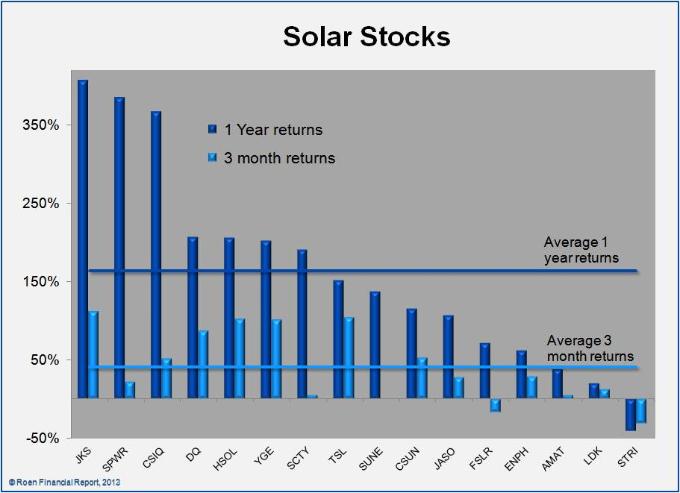 As can be seen in the chart at right, these pure play solar stocks have performed spectacularly. On average they are up 164 percent for the year, and 41 percent for the past three months (SolarCity (SCTY) has only been trading since December 2012, so annual gains are shown from that time). JinkoSolar (JKS), SunPower (SPWR) and Canadian Solar Inc. (CSIQ) have by far outperformed the rest. STR Holdings (STRI), a Connecticut-based company that provides encapsulants used in the production of solar panels, is the one down stock in the group.

Why the outsized solar stock gains? The chart below shows net income for the top three solar stock performers,  and the average for all solar pure play stocks. Clearly, net income improved markedly over the past four quarters. The three companies had extremely negative earnings at the end of 2012, but all have rebounded nicely, with JKS and SPWR solidly in positive territory. When all solar companies are graphed, as shown by the blue line, it clearly shows that the carnage in the solar started to correct itself in late 2012. 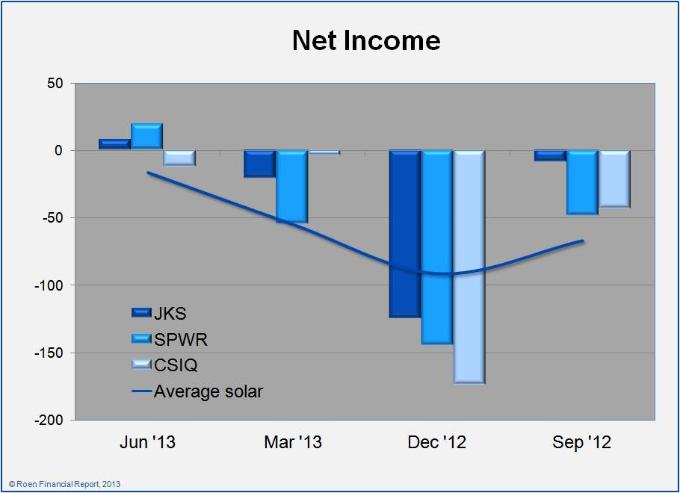 This next chart gets a bit complicated, but is instructive in telling the story of recent solar gains. The chart below shows earnings per share (EPS) estimates for solar companies for the next three years. These are the consensus assessments, averaging projections from firms who cover these companies. The dark blue shows estimates for fiscal year 2014, the medium blue FY 2015, and the light blue FY 2016. 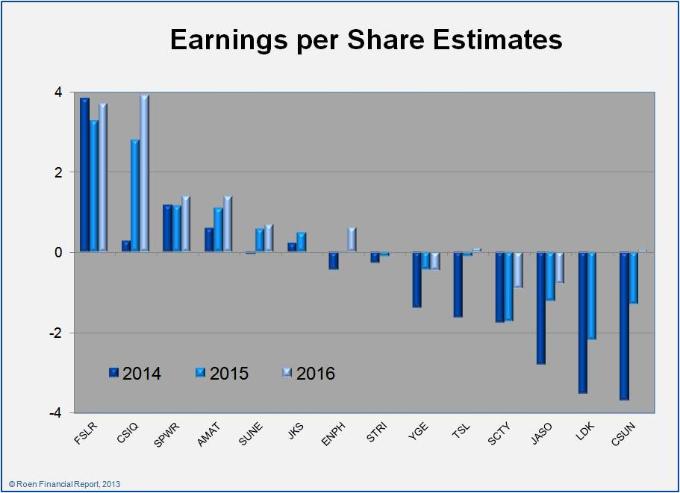 The company with the most consistent, and most promising earnings estimates, is First Solar (FSLR). EPS are projected to remain high for FSLR over the next three years. CSIQ shows the greatest improvement, much of the reason why the forward-looking stock market has generated huge gains for this China-based solar cell and module company.

Even the companies that have negative earnings show marked improvement in their EPS projections. While some of these may be good long-term investments, companies projected to have negative consensus earnings three years out look quite speculative.

Overall, I believe solar as a sector will continue to outperform in the medium to long term. Positive developments include:

The sector will probably remain volatile, though, due to the following limitations:

I believe the best strategy moving forward is to vary investments through the sector in as many ways as possible. The mix should be done through a range of company sizes, locations, technologies employed and the like. Diversified investors who are in solar for the long haul will should benefit greatly from their patience.

This article was originally published on The Roen Financial Report and was republished with permission.