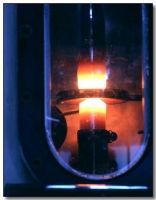 Peterborough, New Hampshire [RenewableEnergyAccess.com] Production demand and raw material supply are giving photovoltaic manufacturers a rough lesson in economics. For the past few years the solar industry has faced a tight market for silicon feedstock because of a renewed demand for silicon from the semiconductor and computer chip industry. Silicon is the raw material used for photovoltaic (PV) cells and modules.

“The solar industry has grown to the point that the silicon demand is exceeding the supply,” said Thomas Zarrella. Zarrella is the president of GT Solar in New Hampshire, which produces fabrication lines and manufacturing equipment for the PV industry. The solar industry has relied mostly on the “tops and tails” of the semiconductor industry since PV manufacturing moved out of the government laboratories and into the commercial market. Tops and tails refers to ends and sides of a silicon ingot, which are cut off after production because they contain more impurities than the center of the ingot. When the semiconductor industry slowed in the late 1990s, the silicon producers needed to sell their available inventory of feedstock. The solar industry was growing and was there to fill the gap in sales. But when the semiconductor industry began to pick-up again silicon producers honored their previous contracts over the demand of the PV industry, which was continuing to develop. “We’ve grown to a point where we’re something like 40 percent of the silicon market,” said Rhone Resch, who is the president of the Solar Energy Industry Association (SEIA). The solar industry’s growth is so pronounced that SEIA created the Crystalline Silicon Initiative, which is a lobbying effort for increased government funding toward silicon research. Reducing materials use and increasing PV cell efficiency would have a direct effect on manufacturers because silicon is one-third of the cost of cell production, Resch said. Exacerbating the situation is the fact that Solar Grade Silicon (SGS) of Washington State is the only company in the world that is dedicated to producing silicon specifically for the solar industry. Company President Tor Hartmann said major silicon producers Wacker in Germany, Tokuyama in Japan and Hemlock in the U.S. have strong ties to the semiconductor industry, though they have dedicated a portion of their output to the PV industry. Hartmann said the market should continue to be tight through 2006 because of growth in both the PV and semiconductor industry. Long-term contracts from companies in the solar industry would make it easier for SGS to expand production and meet the silicon demand, according to Hartmann, because contracts can help him secure investment capital for facility improvements. SGS is considering increasing silicon production from 2,100 tons a year to 3,000, and it would be the first expansion the company has experienced in a few years, he said. The most recent numbers available for total PV silicon production worldwide are 6,000 tons in 2003, from an IEA report on the agency’s Photovoltaic Power Systems Program. Europe and the U.S. led the market then, but the demand for module production in the U.S. has outstripped the silicon availability all of the way down the supply line, according to the President of GT Technologies Thomas Zarrella. High demand allows the supplier to ask a premium price, he said, but there are some market changes in the works. “There’s a new phenomenon happening in the solar industry. The new players are growing into a different type of industry,” he said. Larger companies, such as British Petroleum (BP) and General Electric (GE), are entering the silicon market specifically for solar applications. Being a large company doesn’t ensure an easy entrance into the market. BP Spokeswoman Sarah Howell said silicon prices have almost doubled since 2002, and the solar industry expects to see pricing pressure from silicon manufacturers until production expansions match the PV industry requirements. “We are looking at many ways to mitigate this pricing increase, including increasing the yield of silicon in the manufacturing process as well as reducing wafer thickness,” Howell said. “BP Solar is also collaborating with R and D departments from major companies and other partners to develop less expensive silicon sources.” Thinner silicon wafers means a reduction in the amount of materials used and could, in turn, drive technology improvements for silicon production. Zarrella said that some companies are working on purifying the silicon used in the steel industry for PV. Other PV cell manufacturers are trying to use more of the silicon ingots by slicing off less of the tops and tails. However, until those approaches are improved, the semiconductor market will determine how the solar silicon market operates, according to Zarrella, and supply will feel like a beg, borrow or steal market.