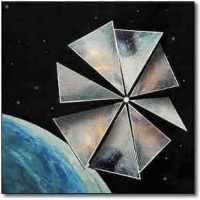 With the delivery of all electronic systems, Cosmos 1 — which could be the world’s first solar sail craft — achieved a critical milestone in its countdown towards its launch later this year or early in 2005.

Pasadena, California – August 19, 2004 [SolarAccess.com] Cosmos 1 is a project of The Planetary Society and is solely sponsored by Cosmos Studios. The Space Research Institute (IKI) in Moscow has completed the qualification of all flight electronics and tests of mission control software. The parts have been shipped to NPO Lavochkin, one of Russia’s largest aerospace companies, where they will be integrated on to the spacecraft. “This long-anticipated and crucial milestone gives us the green light to begin final assembly of the spacecraft,” said Dr. Louis Friedman, Executive Director of The Planetary Society and Project Director of Cosmos 1. “If all goes well, we plan to ship the spacecraft to the launch preparation site near the port of Murmansk by the end of November.” Cosmos 1’s mission goal is to perform the first controlled solar sail flight. Proponents say solar sailing is the only known technology that may someday enable interstellar flight. Solar sailing is done not with photovoltaics or wind, but with reflected light pressure – its push on giant sails can change orbital energy and spacecraft velocity continuously. Once injected into Earth’s orbit, the sail will be deployed by inflatable tubes, which pull out the sail material and make the structure rigid. Cosmos 1 will have eight blades, configured like a giant windmill. The blades can be turned like helicopter blades to reflect sunlight in different directions. This enables the sail to “tack,” tracking the sun and controlling the attitude of the spacecraft. Each blade measures 15 meters in length and is made from 5-micron-thin aluminized, reinforced Mylar — about 1/4 the thickness of a trash bag. Most spacecraft are launched from land, but Cosmos 1 will launch on a Volna rocket from a Russian submarine beneath the Barents Sea. A network of ground stations will track and receive data from the spacecraft after launch. The prime Russian stations are near Moscow, but additional tracking sites around the world include sites operated by US government agencies: the National Oceanic and Atmospheric Administration (NOAA) and the U.S. Air Force. NOAA’s Satellite and Information Service will permit tracking from its site in Fairbanks, Alaska. The Air Force will provide optical pictures of the deployed sail from the Air Force Maui Optical and Supercomputing (AMOS) site at Haleakala, Hawaii. Other tracking sites include the University of California, Berkeley Space Science Laboratory ground station; two specially constructed portable stations for backup; and Panska Ves, a Czech ground station. Several solar sail spacecraft have been proposed over the last few years, but none except Cosmos 1 has been built. NASA, the European and Japanese space agencies all have solar sail development programs, but no flights scheduled. NASA and ESA have conducted ground tests, and the Japanese space agency recently conducted a test of sail deployment on a sounding rocket (see related story at the link below) “There are other private initiatives to convert long-established space technologies into commercial business ventures,” said Ann Druyan, CEO of Cosmos Studios and Mission Program Director. “I believe Cosmos 1 is the first instance of a small business going for a revolutionary scientific and technological breakthrough in a wholly new mode of space travel. Cosmos Studios’ goals are to generate new knowledge and to tell the inside story of how the ‘Wright brothers’ of today are changing our notion of the possible.” Certification of readiness for launch will be conducted upon completion of spacecraft assembly and final testing. At that time a specific launch date will be selected, in coordination with the Russian Navy and the Makeev Rocket Design Center, which builds and operates the Volna rocket.