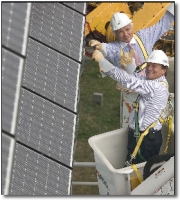 Clean electricity distribution should start at home, and Toronto Hydro-Electric System has installed a 36 kW industrial solar photovoltaic (PV) generation system at the service center headquarters of the distribution plant. Electricity generated by the system will feed directly into the building and provide approximately 12 percent of the power needed to run the lights.

Toronto, Canada – August 27, 2004 [SolarAccess.com] There are 189 Sanyo modules on the roof, and each module can generate 190 W of electricity. “With the successful launch of this pilot project we are providing Torontonians with an opportunity to see a working commercial-style solar installation in operation,” said Toronto Hydro Corporation President and CEO David O’Brien. “This project gives us another tremendous opportunity to showcase alternative energy sources and to reinforce the importance of creating a conservation culture.” The PV pilot project is the second green energy generation system launched by energy supplier Toronto Hydro in the past two years. In 2003, the company unveiled their first urban wind turbine on the shores of Lake Ontario at Exhibition Place in partnership with WindShare, a community-based cooperative. The total combined output of the solar power system and wind turbine is enough to power up to 300 homes. Using solar power as part of the service center’s energy mix is projected to prevent up to 37.8 tons of carbon dioxide annually. The 12-acre building is home to 800 employees, including engineering, construction, warehousing, planning, skilled electrical trades and technical staff, and also houses the company’s fleet of 650 alternative fuel vehicles. Toronto Hydro Energy Services provided the design engineering and general contractor services, Phantom Electron Corporation was the installing contractor, and Xantrex provided the inverters. “We were very pleased to work with Toronto Hydro to create a showcase for solar energy in Canada,” said Mr. Hisakatsu Sawada, president of Sanyo Canada. “Over the last several years we’ve seen a surge in demand for solar energy in Europe and Asia, and this pilot project provides Canadian businesses with a great example of the possibilities of solar.”