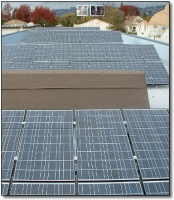 San Rafael, California – April 8, 2004 [SolarAccess.com] The company installed four arrays, or groups, of photovoltaic (PV) panels at the school that face the sun at three different angles. The arrays will be separately monitored so science students can compare the power generated by each array according to its orientation to the sun. The electronic monitor readout will be delivered to a computer in the science classroom where students will be able to track daily and seasonal solar energy production based on the movement of the sun across the sky from winter to summer. “The photovoltaics allow us an opportunity to expose our children to the importance of conserving the environment in a very tangible way,” said Laroilyn H. Davis, Berkeley Montessori head of school. “We are very fortunate to be in a position to utilize this technology in our school.” The new Berkeley Montessori School (BMS) Elementary-Middle School Campus opened for class on Monday, February 23. BMS is an independent school serving 270 children ages 3 to 14, and has an Early Childhood Campus at a separate location. Berkeley Montessori School is committed to providing an educational background that includes respect for the environment and knowledge of sustainable and renewable sources of energy. The K-8 solar curriculum, developed by Sun Power and approved by the California Department of Education, includes elements of chemistry, math, astronomy, meteorology and geography. The curriculum includes interactive lab projects such as Building a Solar Oven and Building a Solar Water Heater. “We’re happy to be a part of the educational process at the new Berkeley Montessori School. This is a great opportunity to educate young people on the advantages of renewable energy,” said Dan Thompson, president of Sun Power. “Sun Power helped create a scientific experiment by dividing the solar system into four arrays with three different exposures to the sun and separate monitoring to demonstrate to students the sun’s direct effects.” Sun Power installed 74 Kyocera KC-125G PV modules at the Elementary-Middle School Campus, and four SMA 2.5 kW Sunny Boy inverters, one for each array. Sun Power installed a SMA Sunny Boy Plus monitor to track solar electric energy production in real time. The four solar arrays at BMS tilt towards the sun at three different angles. The first array is tilted at 15 degrees from horizontal; the second array at 22.5 degrees; and the third and fourth arrays at 30 degrees. The 15-degree array will be most productive in the summer when the sun is high overhead. In winter, when the sun is low in the sky, the 30-degree tilted arrays will be the most efficient. Students may find that the 22.5 degree-tilted array is the most productive year-round. In addition to the photovoltaic system, the BMS Elementary-Middle School Campus features in-floor hydronic radiant heating, passive ventilation, exterior sun control devices, natural daylighting, a light-sensitive dimming system that dims when enough natural light is in the room, point-of-use hot water, and recycled/sustainable building materials including sustainably-harvested bamboo flooring and recycled glass counters. The BMS Elementary-Middle School Campus is a combined new construction and adaptive remodel project by Pfau Architecture Ltd. of San Francisco, a renowned “green building” architect. The campus is located on the site of the historic Santa Fe Railway Berkeley Depot, a registered landmark. Two new wings were designed by Pfau Architecture to accompany the remodeled depot, including the West Building where the solar system is located. “We believe that as builders of our environment we have a moral obligation to try to implement more sustainable energy solutions and work to reduce our culture’s tendency towards poor stewardship of our resources,” said Peter Pfau, principal of Pfau Architecture Ltd. “The PV system provides many benefits to the school, particularly its environmental sensitivity, ability to give back to the community, and teach children about alternative energy.”