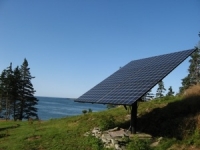 Texas, United States [RenewableEnergyWorld.com] According to research firm DisplaySearch’s Quarterly PV Cell Capacity Database & Trends Report for Q3 2009 solar cell manufacturing capacity is expected to grow 56% in 2009 to 17 gigawatts (GW) and ramped capacity, which was only 2.3 GW in 2005, is forecast to grow at a compound annual rate of 49% to more than 42 GW in 2013.

According to the report through 2006, Japan had the largest solar cell production capacity in the world. However, Chinese companies started to ramp up a host of new facilities in 2005 and by 2007 had more solar cell capacity on line than any other country.

Between January 2008 and July 2009, approximately 11.4 GW of new solar cell capacity was installed in facilities around the world. Most of these were previous investment commitments, and that is the reason that capacity is continuing to grow 56% in 2009 despite falling demand.

In terms of capacity available for production in 2009, First Solar is the largest solar cell manufacturer with more than 1 GW of capacity. Q-Cells and Suntech are not far behind and essentially tied for second place. These and other current leading PV cell manufacturers are forecast to invest at the highest rates over the next four years.

By 2013, these three companies plus JA Solar, Motech, REC, SunPower, Yingli, Showa Shell Solar (assuming it moves forward with a planned 1 GW CIGS fab), and Sharp are forecast to be the top 10 makers, with more than 16 GW or 38% of 2013 capacity.

“Despite PV module demand shrinking 17% in 2009, so much cell manufacturing equipment was ordered and installed over the past year that capacity is still expected to grow 56% this year,” said Charles Annis, DisplaySearch’s VP of Manufacturing Research and author of the report. “With demand and capacity moving in different directions, the PV industry is currently experiencing an enormous over-supply that is causing rapid price erosion and potentially setting the stage for the failure of multiple cell manufacturers, particularly companies pursuing a-Si thin film solar cells. The PV industry will begin working through this excess capacity as demand recovers next year and takes off in 2011 and beyond.”

For information on the DisplaySearch Q3 2009 report, click here.

To hear opinions from across the industry on the current state of the PV supply chain and market dynamics, play the video below.