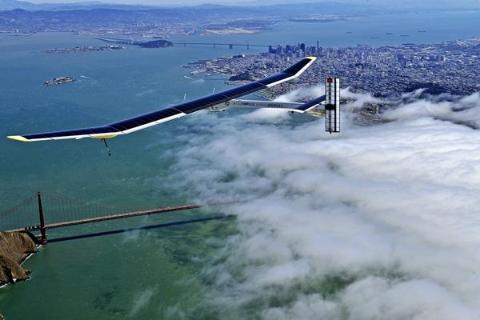 Geneva, Switzerland — Two Swiss pilots plan to fly a solar-powered plane around the earth, pushing human endurance as well as the boundaries of a technology that the aviators say isn’t anywhere near reaching its full potential for industry.

Bertrand Piccard and Andre Borschberg will take turns piloting a single-manned ultralight plane called Solar Impulse that’s the size of a Boeing 747 jumbo jet, yet the weight of a family car.

After crossing the U.S. and completing an overnight flight, the aviators are now training to withstand flying non-stop for five days and nights to prepare for ocean crossings stuffed in a tiny cabin traveling as high as 27,000 feet at about 45 miles per hour. Corporate sponsors including Swiss watchmaker Omega and Schindler Holding AG are hoping the $160 million project will give a lift to renewable energies and power conservation in industry. Schindler is developing solar-powered elevators.

“This is the first airplane with unlimited endurance: there is no limit in terms of flight time,” Borschberg, 61, said at the Solar Impulse hangar in Payerne, Switzerland. “As we have only one pilot on board, the main question is, how to make the pilot sustainable as well?”

The pilots will set off on their 21,000-mile journey in March from the Persian Gulf, heading eastward to cross India, China and the U.S. before returning either via Europe or Africa.

On the shorter flights, lasting about 24 hours, the pilots will have to go without sleep. On longer legs, they will be allowed 20 minute naps every three or four hours, but only when the plane is flying above unpopulated areas.

The entire trip will involve about 25 days of flight over several months. The cabin is unpressurized, so the pilot will wear an oxygen mask.

“Today in our world, half of the energy we use is wasted because of old technologies, old engines, old light bulbs, badly insulated houses, badly run electrical heaters and things like that,” Piccard, 56, said. “What Solar Impulse shows is that solutions exist, they can be profitable and create jobs. That’s how you can motivate people. Suddenly you have companies who say there’s business to do.”

Bayer AG helped develop carbon-fiber composites to reduce the plane’s weight. The German chemical maker also developed special insulating foam to protect batteries from minus-40 centigrade temperatures. That insulation is starting to be used in fridges and freezers.

The plane has more than 17,000 solar cells manufactured by Total SA’s SunPower Corp. They’re printed on a waterproof resin film conceived by Belgian chemical maker Solvay SA that’s thinner than paper and serves as the skin of the wings.

“If you put solar cells on a normal airplane, it would just run the entertainment system, the video on board,” Piccard said.

Both pilots have succeeded in 72-hour flight simulations and have five months to boost that to five days. To prevent mishaps while napping, Solar Impulse upgraded to a new plane with a system that alerts the aviator if it starts veering off course. Turning to an Indian yogi and a Swiss medical clinic for advice, the pilots developed a regimen of yoga, breathing exercises and self-hypnosis to keep their capacities intact.

Nestle SA prepared special food for the flight, as the pilots need dried products that can withstand 95 degrees Fahrenheit and temperatures below freezing at night. The plane has a built-in toilet, a step up from the previous model, where the pilots resorted to using bottles for that function.

Piccard and Borschberg say their aircraft is a message for all renewable technologies as well as energy-efficiency measures. This year it gained sponsorship from ABB Ltd., a Swiss company that ranks as the world’s largest maker of the devices that convert solar energy into electricity.

Borschberg, a former member of the Swiss air force and stunt flier, formed Solar Impulse in 2004 with Piccard, who is from a Swiss family of adventurers. Piccard’s grandfather Auguste was the first person to reach the stratosphere, his father Jacques plumbed the depths of the Marianas Trench, and Bertrand made the first round-the-world hot-air balloon flight.

As the flight coincides with next year’s United Nations conference on climate change in Paris, the pilots are in talks with international organizations about how the project can be used as a political statement, Piccard said. Solar Impulse may also lead a petition drive for people to show support for clean technologies.