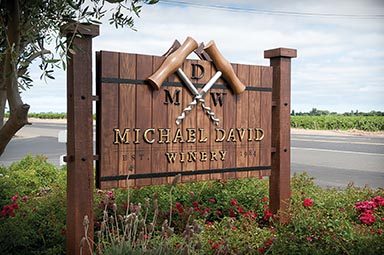 Michael David Winery announced the completion of phase one of its solar power electric systems to its Highway 12 and Bare Ranch locations in Lodi, Calif. Having prided themselves for years on their sustainable growing practices, the winery now looks to expand its sustainability platform.

Fusion Power Design, based in Lodi, engineered and installed the solar electric systems at both facilities. The Highway 12 facility now has two systems, and together they have 350 panels for 108-kW system, producing nearly 200,000 kWh per year. That will offset 15-20 percent of the usage of the winery. Bare Ranch has a total of 290 panels that are supplying electricity for the main event center and the ag shop on the same property. The system totals 72.5 kW and will produce an average of 115,000 kWh of power each calendar year. That is enough power to offset 90-100 percent of the company’s annual needs. The solar installation will pay for itself in under four years.

Looking towards the future, plans include a solar electric system at the barreling/aging facility on Armstrong Road that will offset 100 percent of the facility’s electrical needs. The company also is exploring options to add new shade structures to existing winery land. These shade structures can come in the form of tank shade roofing, parking lot structures, and pole barns with the idea in mind of reducing energy use for cooling (having more shade) and building them with the structural engineering necessary to house more solar panels.

Michael David Winery is owned by brothers Michael and David Phillips, who have built their Lodi winery into one of the fastest growing wineries in the U.S. The Phillips brothers released their first commercial wine in 1984 under the Phillips Vineyards label after years of growing grapes for other wineries. Now celebrating more than 30 years as a bonded winery, Michael and David have over 800 acres of vineyards in Lodi. They pride themselves on their meticulous farming practices and sustainable wine grape growing, which result in superior quality in the bottle. Their hard work has paid off as the wines regularly take top awards and recognition nationwide. Michael David Winery is located one mile east of Interstate 5 on Highway 12 in Lodi, California.

This article was originally published on PennEnergy and was republished with permission.