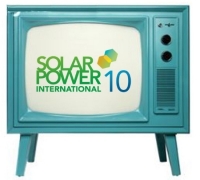 Los Angeles, CA, USA – Three of the most pressing issues in the solar market today revolve around reducing the installed cost of systems, meeting transmission needs and accelerating job growth.

These three issues are interrelated. As system costs drop and grid integration issues are solved, installations rise, increasing the number of jobs created throughout the value chain, from manufacturing to system maintenance.

Below is a series of interviews at Solar Power International on these key themes.

Stephen Lacey spoke with Mike Grunow of Solyndra about reducing the cost of modules, the company’s pulled IPO and the restructuring of the executive team. Solyndra had a rough year in 2010, and the two talked about if the company can meet its immediate technology challenges.

Drilling deeper into the jobs question, Runyon spoke with Tony Clifford, CEO of Standard Solar, an integrator that was recently named the fastest-growing renewable energy company by Inc magazine. Standard Solar has grown from 3 full-time employees just 3 years ago to more than 80 today. Clifford said that Standard Solar could add as many as 35 new jobs in the first half of 2011. He talked about the company’s strategy to increase job creation.

These are just a handful of the many videos we put together at the conference. For all our coverage from Solar Power International, check out our video page.