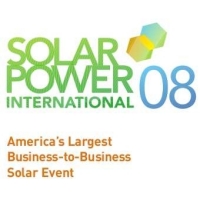 Last night, attendees got their first glimpse of the caliber of the show when Governor Arnold Schwarzenegger addressed a packed auditorium and praised solar industry professionals for the amazing growth that the industry has experienced.  Indicating that he feels this industry will continue its growth despite the shaky global economy, he said that he has always believed that, “green for the environment can mean green for the economy.”

After that exhilarating start, guests were invited to a kickoff party on the terrace of the conference center, where RenewableEnergyWorld.com caught up with Julia Hamm to get her thoughts and impressions of the show so far.

On Day 2 of the conference, visitors have the opportunity to see a CEO panel on market development with Michael Ahearn of First Solar, Lyndon Rive of SolarCity, James Rogers of Duke Energy and Santiago Seage of Abengoa Solar. An additional CEO panel also on the second day of the conference will look at driving down costs with participants that include Matthew Cheney of MMA Renewable Ventures, Martin Heming of SCHOTT Solar, Anton Milner of Q-Cells and Jeannine Sargent Oerlikon Solar. Finally, U.S. Senator Maria Cantwell and residential production builder Shea Homes President, Rick Andreen, will give the closing keynotes on the third day.

The Solar Electric Power Association (SEPA) and the Solar Energy Industries Association (SEIA), organizers of show, explain that “the distinguished standing of the speakers clearly demonstrates the significance of solar power both nationally and globally.” They point out that interest in solar energy at the top level of leadership across industries is increasing daily.

In addition to listening to the top-notch speakers, attendees can also take part in some of the more than 60 breakout sessions that will be presented during conference and also attend the Solar Block Party that will take place on Tuesday night in San Diego’s famous gaslight district.

This year the show added “International” to its name in order to acknowledge the fact that attendees are expected from at least 70 countries.

While the Solar Industry continues to experience a boom, the world is in the midst of a financial crisis that promises to shake up markets across the globe. And even though the U.S. government has finally passed the much-needed tax credit extensions for the solar industry, the U.S. economy remains unpredictable at best. How will these factors play out for solar? Will new companies still be able to get financing? Will projects go on as planned? Will technological developments continue to progress at the same pace? RenewableEnergyWorld.com intends to look for the answers to these and other important questions about solar energy today.