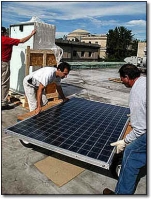 The Massachusetts Institute of Technology’s (MIT) Hayden Library is now generating some of its own power through a recently completed 13 kW solar photovoltaic (PV) system.

Cambridge, Boston – September 23, 2004 [SolarAccess.com] Cranes hoisted 42 solar panels to the roof of the library on the morning of September 15. This is the third such solar power panel installation at MIT – others are on the roofs of the Student Center and Building N52 – but the installation on Hayden Library is the largest. The library’s roof was selected by MIT’s Department of Facilities for its ideal southern exposure, according to Laxmi Rao, a senior project manager with the department, who said she expects the panels to be operational by the end of the month. The project is part of an ongoing initiative that Rao and others have been involved in to reduce MIT’s “emissions footprint.” In 2002, the MIT Community Solar Power Initiative was awarded a US$455,700 grant from the Massachusetts Renewable Energy Trust for solar installations on campus and on MIT community members’ homes in several cities and towns, including Cambridge. “The Libraries are thrilled to be a part of this project,” said Ann Wolpert, director of Libraries. “It’s a great opportunity for us to incorporate environmentally friendly technology and be a good neighbor to the Cambridge community.” The 13 kW system on the library’s roof is expected to generate around 15,000 kW hours a year – roughly equivalent to the energy needed to power two homes for a year. The production of the electricity will result in zero greenhouse gas emissions and will supplement power provided by MIT’s co-generation plant on Vassar Street. The other two solar power panel installations on campus generate a combined total of 11,500 kW hours. To learn more about the MIT Community Solar Power Initiative and view photos of solar power panel installations go to the link below. Courtesy of Heather Denny, MIT Libraries