Cambridge, Mass. — Most efforts at improving solar cells have focused on increasing the efficiency of their energy conversion, or on lowering the cost of manufacturing. But now MIT researchers are opening another avenue for improvement, aiming to produce the thinnest and most lightweight solar panels possible.

Such panels, which have the potential to surpass any substance other than reactor-grade uranium in terms of energy produced per pound of material, could be made from stacked sheets of one-molecule-thick materials such as graphene or molybdenum disulfide. 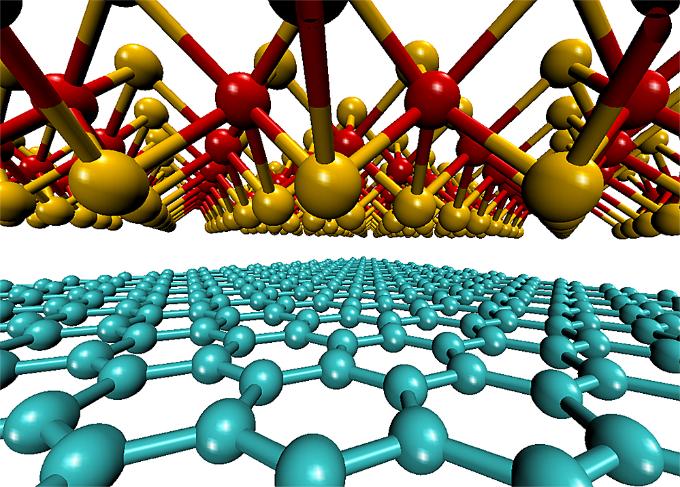 The MIT team found that an effective solar cell could be made from a stack of two one-molecule-thick materials: Graphene (a one-atom-thick sheet of carbon atoms, shown at bottom in blue) and molybdenum disulfide (above, with molybdenum atoms shown in red and sulfur in yellow). The two sheets together are thousands of times thinner than conventional silicon solar cells. Graphic: Jeffrey Grossman and Marco Bernardi

Jeffrey Grossman, the Carl Richard Soderberg Associate Professor of Power Engineering at MIT, says the new approach “pushes towards the ultimate power conversion possible from a material” for solar power. Grossman is the senior author of anew paper describing this approach, published in the journal Nano Letters.

Although scientists have devoted considerable attention in recent years to the potential of two-dimensional materials such as graphene, Grossman says, there has been little study of their potential for solar applications.  It turns out, he says, “they’re not only OK, but it’s amazing how well they do.”

Using two layers of such atom-thick materials, Grossman says, his team has predicted solar cells with 1 to 2 percent efficiency in converting sunlight to electricity, That’s low compared to the 15 to 20 percent efficiency of standard silicon solar cells, he says, but it’s achieved using material that is thousands of times thinner and lighter than tissue paper. The two-layer solar cell is only 1 nanometer thick, while typical silicon solar cells can be hundreds of thousands of times that. The stacking of several of these two-dimensional layers  could boost the efficiency significantly.

“Stacking a few layers could allow for higher efficiency, one that competes with other well-established solar cell technologies,” says Marco Bernardi, a postdoc in MIT’s Department of Materials Science who was the lead author of the paper. Maurizia Palummo, a senior researcher at the University of Rome visiting MIT through the MISTI Italy program, was also a co-author.

For applications where weight is a crucial factor — such as in spacecraft, aviation or for use in remote areas of the developing world where transportation costs are significant — such lightweight cells could already have great potential, Bernardi says.

Pound for pound, he says, the new solar cells produce up to 1,000 times more power than conventional photovoltaics. At about one nanometer (billionth of a meter) in thickness, “It’s 20 to 50 times thinner than the thinnest solar cell that can be made today,” Grossman adds. “You couldn’t make a solar cell any thinner.”

This slenderness is not only advantageous in shipping, but also in ease of mounting solar panels. About half the cost of today’s panels is in support structures, installation, wiring and control systems, expenses that could be reduced through the use of lighter structures.

In addition, the material itself is much less expensive than the highly purified silicon used for standard solar cells — and because the sheets are so thin, they require only minuscule amounts of the raw materials.

John Hart, an assistant professor of mechanical engineering, chemical engineering and art and design at the University of Michigan, says, “This is an exciting new approach to designing solar cells, and moreover an impressive example of how complementary nanostructured materials can be engineered to create new energy devices.” Hart, who will be joining the MIT faculty this summer but had no involvement in this research, adds that, “I expect the mechanical flexibility and robustness of these thin layers would also be attractive.”

The MIT team’s work so far to demonstrate the potential of atom-thick materials for solar generation is “just the start,” Grossman says. For one thing, molybdenum disulfide and molybdenum diselenide, the materials used in this work, are just two of many 2-D materials whose potential could be studied, to say nothing of different combinations of materials sandwiched together. “There’s a whole zoo of these materials that can be explored,” Grossman says. “My hope is that this work sets the stage for people to think about these materials in a new way.”

While no large-scale methods of producing molybdenum disulfide and molybdenum diselenide exist at this point, this is an active area of research. Manufacturability is “an essential question,” Grossman says, “but I think it’s a solvable problem.”

An additional advantage of such materials is their long-term stability, even in open air; other solar-cell materials must be protected under heavy and expensive layers of glass. “It’s essentially stable in air, under ultraviolet light, and in moisture,” Grossman says. “It’s very robust.”

The work so far has been based on computer modeling of the materials, Grossman says, adding that his group is now trying to produce such devices. “I think this is the tip of the iceberg in terms of utilizing 2-D materials for clean energy” he says.