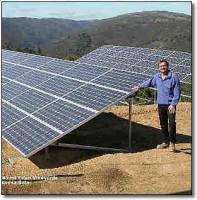 Mount Eden Vineyards made the shift to a 100 percent solar power system for the winery’s electric needs after Akeena Solar sold them on the other benefits of power from the sun. Mount Eden owner Jeffrey Patterson said he hadn’t considered a solar photovoltaic (PV) array to run the winery’s production facilities, main offices, laboratory and residences until Akeena contacted him.

Los Gatos, California – August 18, 2004 [SolarAccess.com] “The State of California is drastically short of electrical generating capacity,” Akeena President Barry Cinnamon said. “It is encouraging to see private companies such as Mount Eden Vineyards take action to generate their own power and improve our environment.” The winery is about 2,000 feet up Mount Eden, and is the oldest winery in the Santa Cruz Mountains. Every year the vintner produces 5,000 cases of cabernet sauvignon, pinot noir and chardonnay from the 40 acres of grapes planted on his 200-acre property. Solar PV arrays were placed next to one of the vineyards, and supply 20 kW of energy that the winery previously bought from Pacific Gas & Electric (PG&E). The system is wired into Mount Eden’s existing electric service, and allows the vintner to run its electric meter backwards during the summer months. “With the amount of area available for the system at Mount Eden Vineyards, we certainly could have installed a much larger solar power system,” said Cinnamon. “However, our engineering and financial analyses indicated that a 20kW system would be optimal for their historic and planned electrical needs. Since PG&E will not reimburse their customers for excess power produced on an annual basis, designing a system with overcapacity is just wasted money for our customers — not to mention free power for PG&E.” There are three tax incentives for businesses that install solar electric systems in California. First is a 15 percent state tax credit against the cost of the system. Second is a 10 percent Federal tax credit. Third is a five year accelerated depreciation that applies to the final cost of the system. These incentives, when combined with the California’s rebate program, bring cash paybacks on these systems down to approximately five years. “From an environmental point of view, the basic nature of solar power, plus the combination of incentives we will receive from the State of California and Federal government , and, from my viewpoint as a businessman, the estimated cost savings over the life of the system made the decision a ‘no brainer,’ ” said Patterson. Akeena Solar designs and installs residential and commercial solar electric systems in California, New Jersey, New York and Pennsylvania. The company is a member of the Solar Energy Industry Association, Northern California Solar Energy Association and California Solar Energy Industry Association (Cal SEIA). The company also has contracts with vinters Cooper-Garrod and Savannah Chanelle to install PV systems for their sites.