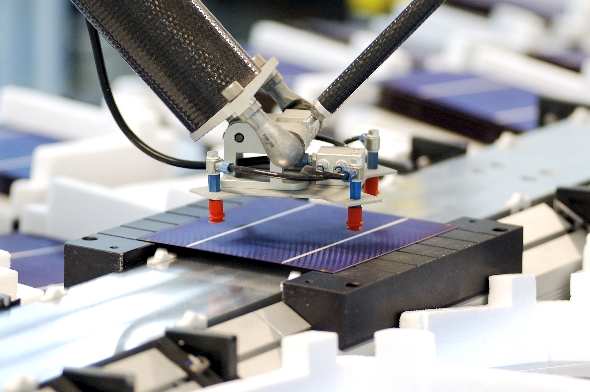 BERLIN — Hanwha Group’s bid to buy the insolvent German manufacturer Q-Cells SE drew a competing approach from a Spanish power-plant builder that also wants to own what was once the biggest solar-cell maker.

Isofoton SA was approved to bid for Q-Cells after Chief Executive Officer Angel Luis Serrano met with the German company’s insolvency administrator Henning Schorisch today, according to an e-mailed statement from Isofoton. Serrano will present the bid, to be made with a U.S. investor it didn’t identify, to Q-Cells’ creditors at an Aug. 29 meeting, it said.

Hanwha, South Korea’s 10th-largest industrial group, yesterday signed a contract with Q-Cells to pay as much as 40 million euros ($50 million) for the Thalheim-based company’s headquarters, factories in Germany and Malaysia, as well as sales units in the U.S., Australia and Japan, Hanwha said in today in an e-mailed statement. The deal is subject to approval from Q-Cells’ creditors at their meeting this week, it said.

Interest has increased in Q-Cells months after its filing for protection from creditors in April. The company’s market value dropped to 35 million euros after its shares fell 98 percent in the last three years.

“Isofoton is still confident that there’s a chance to buy Q-Cells as the creditors haven’t yet agreed to the Hanwha bid,” Carl Graf von Hohenthal, a spokesman for Isofoton working for Brunswick Group GmbH in Berlin, said today in an interview.

Hanwha, whose purchase contract signed with Schorisch yesterday will be reviewed by creditors, also plans to assume 850 million Malaysian ringgit in debt guaranteed by Q-Cells Malaysia, the group said.

“We are optimistic that Q-Cells’ creditors would approve our offer in an Aug. 29 meeting,” Seoul-based spokesman of the Korean group, Park Jang Woo, said by phone today. He ruled out that Isofoton’s possible bid would affect its attempt to acquire Q-Cells. “It’s almost impossible for them to hold talks with other bidders without breaching the agreement signed yesterday.”

Buying Q-Cells would enable Hanwha to boost its capacity to make solar cells and panels to rank the world’s third-largest, it said. Hanwha aims to sign a final contract in early October, the statement said.

Isofoton is especially interested in Q-Cells’ research capabilities and its “European dimension,” von Hohenthal said. It would cut a tenth of Q-Cells’ workforce and keep production and research sites in Germany and Malaysia as the company seeks to boost its production capacity to 1,500 megawatts in the coming two years, it said in the statement.

German solar companies are facing reduced government aid and increasing competition from Chinese companies that has created a global glut of panels. Q-Cells and German competitors Solon SE, Solar Millennium AG and Solarhybrid AG are among a group of solar companies that filed for protection from creditors in the past year.

Hanwha plans to hold on to about three quarters of the workforce in Thalheim, Q-Cells said in a statement yesterday. Christoph Moeller, a spokesman for Q-Cells’ insolvency administrator Schorisch, declined to comment further on the planned sale.