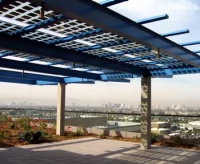 Arizona, and California [RenewableEnergyAccess.com] Two new and notable solar photovoltaic projects were completed this past week, one which the developers say is the first Building Integrated PV (BIPV) high-rise solar-electric system in Arizona, and the other, which developers believe is the nation’s largest residential rooftop solar electric power system.

In the first project, Arizona’s PerfectPower installed its high-rise solar photovoltaic PV system at the Optima Biltmore Towers project, located at 24th St. and Camelback in Phoenix. The system is on the top floor of the towers providing both power and shade for the residents. The solar canopy is meant provide an aesthetically pleasing design. It is also the first Salt River Project commercial solar project under their new commercial solar program. Over at a newly constructed home in Indian Wells, California, the GenSelf Corporation completed the installation of what it believes is the nation’s largest residential rooftop solar electric power system. There is currently no comprehensive national database for solar PV installations, leading to some uncertainty in the many “largest” such claims that are common among solar project news. Regardless, the 57.8-kilowatt DC system uses 275 SunPower 210-watt solar modules, 10 SunPower 5200-watt inverters and a custom designed, lay on the roof, non-penetrating rack system from Sun Link. GenSelf also installed a critical load, Outback battery backup system to provide emergency power to the primary living areas in the event of a utility blackout.