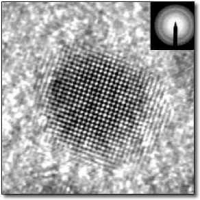 Toronto, Canada [RenewableEnergyAccess.com] Polymer-based solar photovoltaic cells are one of the most highly anticipated fields in the solar industry these days. While current technologies on the market struggle to match their crystalline counterparts in terms of price-per-watt, researchers are on the hunt. Researchers like a team from the University of Toronto that recently announced a breakthrough in capturing light energy from beyond the visible spectrum.

In a paper published on the Nature Materials Web site on January 9, senior author and Professor Ted Sargent, Nortel Networks — Canada Research Chair in Emerging Technologies at the University of Toronto’s Department of Electrical and Computer Engineering, and his team report on their achievement in tailoring matter to harvest the sun’s invisible, infrared rays. “We made particles from semiconductor crystals which were exactly two, three or four nanometres in size,” Sargent said. “The nanoparticles were so small they remained dispersed in everyday solvents just like the particles in paint,” explains Sargent. Sargent’s team then tuned the tiny nanocrystals to catch light at very long wavelengths. The result is a sprayable infrared detector. “Existing technology has given us solution-processible, light-sensitive materials that have made large, low-cost solar cells, displays, and sensors possible, but these materials have so far only worked in the visible light spectrum,” Sargent said. The discovery may help in the quest for cheaper, more efficient renewable energy resources. Specifically, it could help drive up the efficiencies of current polymer-based solar cells which hold the potential to be manufactured at a lower cost than current crystalline silicon cells but have so far been unable to match crystalline power conversion efficiencies. “Companies have already been formed which have discovered how to make roll-to-roll, large area, plastic photovoltaics,” Sargent said. “They face the challenge of low efficiencies in harvesting the sun’s power. Our work has the potential to improve these efficiencies considerably. Sargent expects their research breakthrough could see commercial implementation within 3 to 5 years. Flexible, roller-processed solar cells have the potential to harness the sun’s power, but efficiency, flexibility and cost are going to determine how that potential becomes practice, said Josh Wolfe, Managing Partner and nanotechnology venture capital investor at Lux Capital in Manhattan. “These flexible photovoltaics could harness half of the sun’s spectrum not previously accessed,” he said. Professor Peter Peumans of Stanford University, who has reviewed the U of T team’s research, also acknowledges the groundbreaking nature of the work. “Our calculations show that with further improvements in efficiency, combining infrared and visible photovoltaics, could allow up to 30 percent of the sun’s radiant energy to be harnessed, compared to six percent in today’s best plastic solar cells,” Peumans said. U of T electrical and computer engineering graduate student Steve MacDonald carried out many of the experiments that produced the world’s first solution-processed photovoltaic in the infrared. “The key was finding the right molecules to wrap around our nanoparticles,” he explains. “Too long and the particles couldn’t deliver their electrical energy to our circuit; too short, and they clumped up, losing their nanoscale properties. It turned out that one nanometer – eight carbon atoms strung together in a chain – was ‘just right’.” Other members of the U of T research team are Gerasimos Konstantatos, Shiguo Zhang, Paul W. Cyr, Ethan J.D. Klem, and Larissa Lavina of electrical and computer engineering; Cyr is also with the Department of Chemistry. The research was supported in part by the Government of Ontario through Materials and Manufacturing Ontario, a division of the Ontario Centres of Excellence; the Natural Sciences and Engineering Research Council of Canada through its Collaborative Research and Development Program; Nortel Networks; the Canada Foundation for Innovation; the Ontario Innovation Trust; the Canada Research Chairs Programme; and the Ontario Graduate Scholarship. Information courtesy of Sonnet L’Abbe, University of Toronto