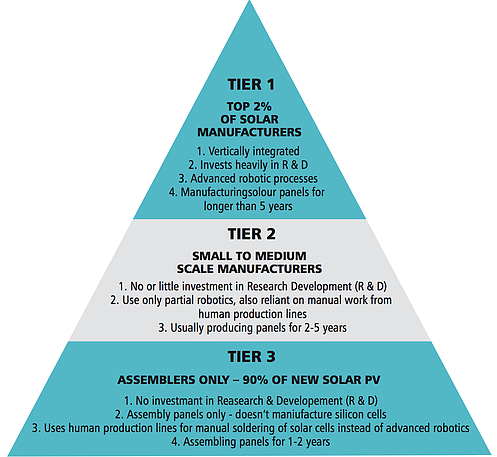 Compared to today’s solar energy market the situation only 8 years ago was quite simple and easy to overview. You had your American and European brands plus a handfull of Chinese brands, who had control over the market. The prices between these brands were quite different and the Chinese manufacturers had started to work on increasing market share, slowly lowering their prices.

Although many consumers and large scale investors welcomed the unexpected – at first slow – price drop of solarpanels, not everyone was sensitive to the significant lower cost of the new Chinese brands. In my days on the road, I carried a variety of brands in my portfolio. Known brands and some new, unknown brands. It was interesting to see that customers were willing to pay up to 50% more for a well known brand. Mind you, prices back then were at an average of 5 EU and 8 USD per Wp! And often these enthusiastic green pioneers did not even get any subsidies. Their motivation to choose for a more expensive installation came from a trust in a better quality product and the accessibility of the manufacturer for any after sales service. Furthermore the warranty certificates given by the American and European manufacturers gave a lot of confidence.

Then as now, Chinese solar panel manufacturers wanted a foothold in the western market because of the enormous potential both residential and large scale solar energy had. The up to date, and sound manufacturing processes that are being used made it possible for them to qualify for the necessary western labels and certificates. This opened doors for hundreds of brands and several hundred sub-brands.

What followed was that the Chinese hinterland got sprinkled with smaller scale manufacturers, mass producing solar panels for the larger companies who had the ties to Europe. Production soon exceeded the demand but China reasoned that the demand would soon pick up and continued producing. This definitely put pressure on the sales price. European traders who wanted to make a quick buck, took to China and bought lots of cheap solar panels, not always knowing where those panels were manufactured. These solar panels were sold as high-quality products in Australia, Europe and America. The labels, certificates and the warranty these companies gave was sufficient to convince installers and consumers.

And so began a price war in 2010. Many Chinese manufacturers reduced their prices so much that it became impossible for American and European manufacturers to compete and this practice resulted in the closure of factories in America and Europe.

An international effort produced the Tier system (Tier 1, 2 and 3) in order to create an overview for the consumer regarding the differences between the manufacturers that flooded the market.

A Tier 1 manufacturer is vertically integrated and exists for more than 5 years. This means that all production steps, including wafer manufacturing and up to assembly of the modules, are done in-house and are automated. These companies are usually the product innovators and first to introduce the latest, effiecient techniques.

A Tier 2 manufacturer is a somewhat younger company that does not always have R&D activities and usually buys the wafers from a Tier 1 manufacturer. Not all is automated in a Tier 2 company which means there is a higher fault risk.

A Tier 3 manufacturer is usually a young company. They employ techniques of the Tier 1 group. The cells are mainly soddered by hand which again means that there is a higher fault risk than with an automated process.

Tip: Choose only Tier 1 or 2 manufacturers to exclude unnecessary risks as much as possible.