New Hampshire, USA — Today The Solar Foundation (TSF), a non-profit organization that seeks to further the understanding of solar energy through research and public education, released its 4th National Jobs Census report, which shows remarkable growth in the U.S. labor market as it pertains to solar energy employment.

In total there were 142,698 solar workers in the U.S. as of November 2013. A solar worker is defined as someone who devotes at least 50 percent of his or her work to solar-related activities.  This is a 20 percent increase over 2012 figures and ten times higher than the national average employment growth rate, which was 1.9 percent.  “This is our most comprehensive [report] yet,” said Andrea Luecke, Executive Director & President of The Solar Foundation, explaining that collecting the data involved making more than 74,000 phone calls and sending out more than 11,000 emails.

Solar project developers were the big winners in terms of job growth rate. In 2012 there were almost 8,000 solar workers who defined themselves as project developers whereas in 2013 that number jumped to more than 12,000, a 52 percent uptick.  According to Luecke, the large increase reflects the huge number of utility-scale projects that were under construction in 2013.

As has been long-predicted, because solar project costs have dropped so dramatically in recent years, the industry added the the largest number of jobs in installation. Just under 70,000 people are employed in the solar installation business, a 21 percent increase over 2012.  TSF predicts that 2014 will again add 21 percent more jobs, a number that would bring the industry solar installation total to more than 84,000 by this time next year.  CEO Lyndon Rive said that SolarCity added 2,000 “highly-distributed” jobs in 2013. Solar installation jobs are “not in any central hub,” he explained, as is the case with other industries such as  finance in NYC or high-tech in Silicon Valley. “We are in 14 states,” he said. “Growth for the next 10 years in solar is going to be very, very exciting,” Rive added. “You can’t outsource these jobs.”

Making a small comeback were solar manufacturing jobs — the sector lost 8,000 jobs between 2011 and 2012 but showed an increase of 100 solar workers in 2013.  The sector now employs 29,851 people. Luecke explained that these numbers are a “vast improvement over last year” and said that manufacturers are feeling a little bit more secure in 2013 than they were in 2012, which is why the TSF predicts and increase of 8.6 percent in 2014. Higher numbers in 2014 may also be attributed to more startups entering the sector this year.

Tom Werner, CEO of SunPower explaned that his company added “hundreds” of jobs in 2013 and expects to add more in 2014.  “We also have 400 SunPower dealers who employ 6,000 more people,” he said.  Not to mention the “70 parts suppliers throughout the country,” he added.

The National Solar Jobs Census 2013 also reports data about salaries paid by solar firms.  According to TSF, wages paid by solar firms are competitive, with the average solar installer earning between US$20.00 (median) and $23.63 (mean) per hour, which is comparable to wages paid to skilled electricians and plumbers and higher than average rates for roofers and construction workers. Production and assembly workers earn slightly less, averaging $15.00 (median) to $18.23 (mean) per hour, slightly more than the national average for electronic equipment assemblers.

In addition, the solar industry is a great employer of U.S. armed forces veterans. TSF said that veterans make up about 9 percent of the solar workforce compared with 7.5 percent of the national economy. On the other hand, women and African Americas are underrepresented.

The chart below shows the number of solar workers in each sector of the industry as well as TSF’s 2014 predicitions. State-level numbers will be realsed in about one month. Download the entire report at this link. 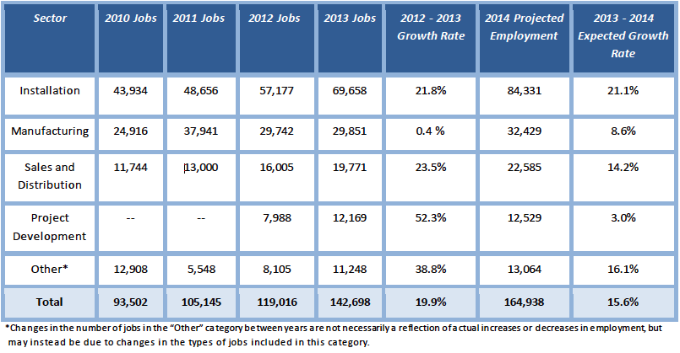