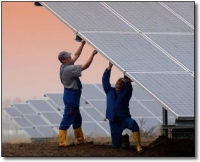 Washington, D.C. [RenewableEnergyAccess.com] Senator Lamar Alexander (R-TN) introduced legislation late in the day yesterday which is being applauded by solar industry representatives in the nation’s capitol. Details have yet to be released, but the bill is tailored to provide relief for the constrained natural gas market and is anticipated to speed the commercialization of solar energy in the U.S.

At a Capitol Hill briefing, the Solar Energy Industries Association (SEIA), representing over 700 companies and 20,000 employees in the US solar industry, praised Senator Alexander for incorporating an aggressive solar energy growth strategy in the Natural Gas Price Reduction Act of 2005. The legislation, which includes a sustained, annually declining tax credit for solar deployment on homes and business, would dramatically expand domestic markets for solar. Exact figures on the tax credit will be released late in the day on April 6, 2005. “We applaud Senator Alexander for introducing legislation that strengthens America’s economic future as well as our energy security,” said Rhone Resch, president of the Solar Energy Industries Association. “This bill increases US domestic solar energy production to meet a significant portion of our energy needs, creating tens of thousands of quality solar industry jobs and encouraging states to invest in growing small businesses. The US has the best solar resources in the industrialized world, and we stand ready to answer Senator Alexander’s call to develop those resources.” The solar provisions are part of a bold and aggressive approach by Senator Alexander to lower the cost of natural gas for American consumers. SEIA’s Rhone Resch noted that solar displacement of natural gas under the bill would save American consumers $15 billion over equipment lifetimes, and stretch the availability of natural gas supplies farther into the future. “Natural gas is a critical part of our energy infrastructure, but we have the highest and most volatile prices in the world,” Resch said. “Solar is the ideal renewable energy technology to displace a portion of the natural gas demand and relieve some of the tightness in the natural gas markets. It can directly displace the need for peaking and intermediate gas plants, because solar power is greatest from 10 to 5 every day — the time that the grid experiences peak power demand.” In addition to achieving long-term energy security benefits, the Alexander legislation could generate new US solar industry jobs and billions of dollars in new manufacturing investments over the next 10 years. This growth would restore the US as the world leader in the $7 billion-per-year global solar PV industry, which grew by 45 percent globally in 2004. RenewableEnergyAccess.com will run an update on the bill’s specifics as soon as they become available.