Solar PV is becoming cheaper than ever. Almost every month, a new industry “low” is set and broken. In September 2017, the U.S. Department of Energy announced that the U.S. solar industry had achieved the 2020 utility-scale solar cost target of US $0.06/kWh, three years ahead of schedule and is moving toward the 2030 goal of $0.03/kWh. The following month, a solar tender for a 300 MW PV plant in Saudi Arabia was bid at the low price of US $0.179/kWh. This record was soon broken in Mexico with solar at $0.177/kWh November.

Solar has become one of the least expensive options for new power generation and is lower than the cost of most fossil fuel-powered generators, enabling solar installed capacity to expand faster than any other fuel. Most analysts predict that the 2017 global solar installed capacity will be around the 100 GW mark and 2018 is expected to see continued growth.

Renewable Energy World asked some of the world’s top industry experts to share their perspectives on technologies and markets for the year 2018.

According to Paula Mints, SPV Market Research, in 2016 Multi c-Si had the largest share at 54 percent of global module shipments. However, in 2017 Mono c-Si is expected to have a 49 percent share, bypassing Multi c-Si.

“The trend is mono’s taking more market share and it will continue in 2018. PERC has become a mature technology and will be put more in mass production,” stated a spokesperson for JinkoSolar, a vertically integrated solar manufacturer.

LG Solar, another solar company, echoed the trend of Mono c-Si, but with N-type.

“LG has invested heavily on N-type Mono-Si technology and will continue to do so because it brings the most value to customers in terms of cost versus efficiency,” said David Chang, Director of U.S. Sales for LG Electronics’ Solar Business. 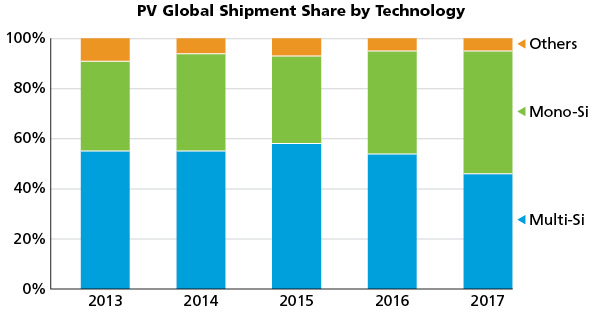 In terms of technological innovations in modules, LG is looking at bifacial modules and AC modules, by utilizing N-type Mono-Si as the fundamental technology. JinkoSolar also considers N-type and bifacial to be hot technology in 2018. Bifacial modules can utilize light from both sides and therefore significantly increase the electricity yield of PV systems.

Besides LG and JinkoSolar, a growing number of PV manufacturers have engaged in development of high efficiency bifacial modules. According to SPV Market Research, shipments of bifacial modules are expected to be less than 1 percent of global solar shipments in 2017 but will increase with utility-scale deployment.

Another trend is that string inverters are getting bigger and bigger in capacity, and low capacity central inverters are being replaced gradually, even in utility-scale applications.

In fact, last year Sungrow released a virtual central inverter concept, which combines the benefit of the command and control of central inverters with the lower O&M of string inverters for utility-scale markets.

The company currently offers the world’s most powerful 1500-volt string inverter rated at 125 kW, which can support up to a 12-MW power block design while maintaining 99 percent maximized efficiency. The size for string inverters is expected to be even bigger in the near future, according to the company.

Although utility-scale solar has been the biggest market segment, distributed generation (DG) is expected to start picking up.

“DG market is growing fast globally, especially in China and the U.S. We have provided string inverters with varied power ranges for those markets,” said Zhou of Sungrow.

“There is strong evidence of a shift from large-scale solar to DG — maybe not in absolute volume but definitely in growth percentage. This can be attributed to a variety of issues associated with utility-scale solar from transmission cost to curtailment to availability of land. This shift is evident in countries such as EU, Japan, China, and the U.S.,” said Chang of LG. “Both bifacial and AC modules should enable DG to grow more.”

JinkoSolar agrees that DG in China is growing. The company also expects that China, the U.S., and Europe will be the biggest solar off-grid markets in the future.

According to SPV Market Research, PV development in China grew by 53 percent in 2017 to 52 GW, accounting for more than 50 percent of the global solar capacity. Will China remain dominant in 2018?

Sungrow expects that traditional PV markets like the U.S., Europe, and China will continue to grow and that India and emerging markets such as Brazil and South Korea will also boom because of those countries’ growing power demands and commitment to a shift toward clean energy.

“We expect growth in 2018 in Canada, U.S., EU, Japan and South Korea. We remain very bullish on the U.S. market as they see a shift to DG, where high efficiency N-type Mono-Si modules can flourish,” Chang said.

JinkoSolar is anticipating India to continue to expand, driven by the country’s 2020 target, high demand for power and relatively high-power price of fossil fuel. The company also lists Australia, Spain, Saudi Arabia, and the UAE as growing countries and Egypt as a new market.

JinkosSolar thinks that 2018 will be flat or see 10 percent growth, but this is highly dependent on the policies in China and somewhat hinging on the U.S. trade case decision.