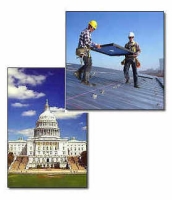 Washington, DC [RenewableEnergyAccess.com] After years of effort, lawmakers on Capitol Hill finally agreed upon a vast package of federal energy legislation. For the average American, there are few, if any, items in the cavernous bill that will have an immediate and measurable impact on their lives. The first ever residential tax credit for solar energy in the past two decades, however, is chief among them.

With the Senate’s approval vote today of 74-26 and a successful House vote of 275-156 on Thursday, the energy bill is officially on its way to the President’s desk to be signed into law. Despite the many proclamations from lawmakers that the bill could help lower gas prices and reduce U.S. dependence on foreign sources of energy, the bill will do little to alleviate either. And, it will offer few immediate or tangible benefits for the average U.S. citizen. “If I was a homeowner and flipping through a newspaper story on the energy bill, I would get pretty depressed at the $14 billion of giveaways for industries that, frankly, are enjoying record profits,” said Rhone Resch, Executive Director of the Solar Energy Industries Association (SEIA). “But the one provision in the bill that all Americans can take advantage of right away is to install solar on their roofs.” For the first time in two decades solar technologies were granted a federal investment tax credit that will promote all forms of solar energy. This includes solar thermal systems that provide for a home’s hot water, photovoltaic systems that provide electric power, solar-hybrid lighting technologies and even to the commercial developers of industrial-scale Concentrating Solar Power plants of the likes that were constructed in the California Desert in the late ’70s and early ’80s. Specifically, the bill increases the existing 10 percent investment tax credit for commercial solar installations to 30 percent for two years with no cap on the amount of the credit. This applies to all property placed in service after December 31, 2005 and before January 1, 2008; credit reverts to the permanent 10 percent credit thereafter. What could have the most impact for typical Americans, the bill also creates a new 30 percent tax credit for residential solar installations for two years; capped at $2000; applied to all property placed in service after December 31, 2005 and before January 1, 2008. Likewise, all solar technologies will be eligible but solar thermal, and solar PV are expected to make the most gains. “If consumers have been waiting for a tax credit for solar, now is the time to do it,” Resch said. “It coincides perfectly with electricity and natural gas prices skyrocketing, and if you think prices will go down, you’re mistaken.” A number of other provisions included in the final bill that will greatly benefit solar, including federal loan guarantees for large-scale “innovative technologies,” government solar purchase authorizations and energy service performance contracts. Other items that can have an immediate and tangible impact for consumers across the U.S. are tax breaks for investments in energy efficiency appliances and an extension of a $2000 hybrid vehicle tax break. The solar tax credit may appear small in relation to the majority of the bill’s focus on the traditional fossil and nuclear industries but it’s a major victory for solar and possibly a sign of shifting attitudes towards solar. “I can’t emphasize how much this is a huge precedent for the solar industry,” said Resch who added that fuel cells were the only other non-traditional energy technology to gain a 30 percent investment tax credit. “I had folks from Exxon coming up and saying ‘how did you do this’ and ‘you came out of left field,'” Resch said. And how they did it was to intensely focus the solar lobbying effort like it’s rarely, if ever, been done before. Resch said the solar industry has traditionally been a fractured industry, unable to agree on a specific and focused set of policy goals. He took lessons and experience he learned in his time prior to SEIA when he was Senior Vice President of the Natural Gas Supply Association. He knew if solar was to gain anything out of this energy bill they would all have to agree on one policy goal. “People sometimes expect for us in the solar industry to come out with that fractured face,” Resch said. “It was a massive team effort where the entire solar industry pulled together to make this happen. It was the singular massage, that’s why we got the 30 percent.” Solar provisions that would benifit all forms of solar were not included in any of the previous congressional efforts to enact an energy bill. Resch said the inclusion of this credit shows recognition that Congress feels that solar is an important part of the energy mix and that they want to see it grow. At least one Congressman aggress. “The 30 percent solar credit for consumers is great news for this nation’s future energy independence,” said Congressman Charles Bass (R-NH), a key negotiator of the final energy bill. “This provision will one day be viewed as the most significant renewable energy policy shift in more than two decades. Consumers driving the industry to meet high expectations and pushing the nation toward self-reliance will produce far greater results than other incentives aimed at producers and utilities.”