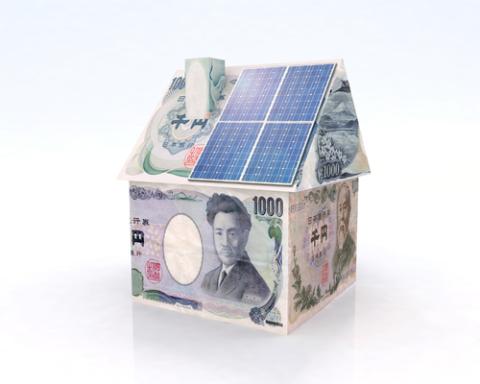 The bank is ready to provide financing for three to six projects in the next 12 to 18 months, said Hans Van Der Sande, director of Deutsche Bank’s structured products group at its Tokyo branch. The Frankfurt-based lender agreed last month to provide a 11.1 billion yen ($109 million) loan for a solar power project on a former golf course north of Tokyo to be operated by a unit of Spain’s Gestamp Renewables Corp.

Japan may add the most solar power capacity in the world this year, according to Bloomberg New Energy Finance, as a two-year-old incentive program attracted investors including Goldman Sachs. Even so, renewable energy accounts for less than 11 percent of its total production, compared with 31 percent in Germany, leaving the nation reliant on fuel imports after the closure of all of its atomic reactors and contributing to 23 straight months of trade deficits.

“Every time a country implements these very, very attractive standards you have a gold rush and that gold rush started two years ago,” Van Der Sande said in an interview. “Now the water is kind of pulling back, smaller people are leaving and the real players are staying.”

Deutsche Bank declined to disclose the interest rates for the solar loans. The average new lending rate in Japan was a record-low 0.779 percent in May, according to central bank data. Average interest margins on dollar lending in the Asia-Pacific region outside of Japan were 2.35 percentage points so far in 2014, according to data compiled by Bloomberg.

“We got reverse inquiries from some of our clients offshore saying ‘we are interested in Japan solar and developing projects there but having difficulty getting finance from Japanese banks,’” said Van Der Sande. Local banks tend to require that project sponsors use Japanese solar panels that international operators don’t want to use because they are more expensive, he said.

Unprecedented BOJ stimulus to overcome deflation has lowered interest rates in Japan. The benchmark 10-year yield has dropped 24 1/2 basis points, or 0.245 percentage point, to 0.55 percent since December 2012 when Prime Minister Shinzo Abe came to power calling for an expansion of monetary easing.

The yen has weakened 15 percent during the period to 101.85 per dollar as of 3:58 p.m. in Tokyo, making it more expensive for Japan to buy fuel from abroad.

At least three of 12 solar power plants that Goldman Sachs helped organize through investor funding are producing power, according to Toru Inoue, a vice president at the U.S. bank’s Infrastructure & Structured Financing Group in Japan.

Insurance companies have invested in bonds arranged by Goldman Sachs and sold by special purpose companies established for the purpose of funding solar deals, Inoue said. Two projects in Japan’s northern Miyagi prefecture raised about 1 billion yen in funding through the sale of notes that carried either an A-or A rating from Japan Credit Ratings Agency Ltd., according to documents from Goldman Sachs.

The bonds carried a premium over similarly rated straight corporate debt because of the relative newness of the product and lower liquidity, he said. Investors want bigger deals and more liquidity, according to Inoue.

“While international investors have also been very keen to enter the Japan solar market, very few have been successful thus far,” said Kawahara. “While there is no legal barrier to entry, the large number of entrenched Japanese financial institutions make it difficult for international players without local partners to enter the market.”

Japan approved a cut in tariffs for solar power as a building boom meant the technology made up 97 percent of new renewable capacity since it offered incentives.

The tariff was reduced in April 2013 to 37.8 yen per kilowatt hour from 42 yen. Japan’s method of subsidy for the industry is similar to the program Germany, Spain and the U.K. implemented, offering an above-market rate for solar power.

Japan gave final approval in March for the 11 percent cut to 32 yen a kilowatt-hour for the 20 years from the fiscal year starting April and offered 36 yen for offshore wind, the Ministry of Economy, Trade and Industry said in a statement. Japan’s sales tax rose 3 percentage points to 8 percent in April and should be added to each rate from then, while the previous tariffs included the lower 5 percent rate.

Orix Corp. began building a 51-megawatt solar power plant on a former golf course in the western prefecture of Mie. The plant will start running in May 2016, the company said in a statement June 4.

The Tokyo-based finance and leasing company has been building large-scale solar power stations across Japan. The company said in April that 17 plants have started running with a combined capacity of 41.3 megawatts.

Mizuho Bank Ltd. and partners will provide loans for a 111-megawatt solar power station being built on the northern island of Hokkaido by SoftBank Corp.’s clean energy unit and Mitsui & Co., according to a statement on March 7. Development Bank of Japan Inc., Sumitomo Mitsui Banking Corp. and nine other institutions will also finance the project.

“Many of clients we talk to are talking to Japanese banks, but I think many of them are finding it difficult to believe that they will ever get financing there,” said Deutsche Bank’s Van Der Sande. “The Japanese banks are very busy making solar loans to their good Japanese clients.”