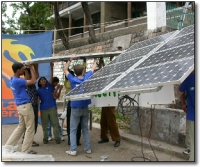 On Earth Day 2004, 25 youngsters from India, Germany, Switzerland and Tibet demonstrated that renewable, clean and peaceful energy is no longer a pipe dream, but a reality. The youngsters worked together to install a 2 kW solar photovoltaic (PV) generator to power the Tibetan Children’s Village (TCV) in Dharamsala because they want the next generation to be a ‘solar generation’ – free from fossil fuels.

Dharamsala, India – April 28, 2004 [SolarAccess.com] The funds for this Greenpeace Solar Generation project, the first of its kind in India, were raised by German and Swiss youth who were unwilling to put up with the ‘conventional’ polluting energy sources of their parents’ generation. Larissa Beumen, Solar Generation activist from Germany, explained why she believes this project is an important one. “Climate change is a global problem that requires international solutions,” Beumen said. “Youth around the world must speak with one voice to demand climate protection.” The success of this Solar Generation project extends far beyond the 2.1 kW solar PV system supplied to the TCV. New friendships were formed between enthusiastic youth from around the world who share a common vision for a clean renewable energy future. The Indian, German, Swiss and Tibetan youth participated in a variety of activities and events in Dharamsala as part of a 4-day workshop, sharing their thoughts about renewable energy. “The Solar Generation project is great because we are learning how to stop climate change and protect the environment by using renewable energy,” Tibetan student Dukthen Kyi said. “Also, it is nice to share our ideas and experiences with youth from other countries.” “One Earth, One Sun, One Future: Act Now!” is the message that the participants painted on banners to send to Johannesburg Renewable Energy Coalition’s (JREC) conference in Bonn in early June. This conference – called ” Renewables 2004 – will discuss legally binding renewable energy targets for member countries of the JREC. Greenpeace is demanding a minimum of 20% renewables by 2020 as the legally binding target for Europe, and is calling for the worldwide phasing out of subsides for fossil and nuclear fuels.