Miyazaki, Japan — One of the world’s largest solar module factories, perched atop the bucolic foothills of West Japan’s bamboo and pine-covered mountains, began operating in February.

This fully automated facility – capable of producing about 1 GW of thin-film solar modules – is the result of more than three decades of research and development by an oil company, which hopes to eventually generate 50% of its revenue from sales of renewable energy products and services.

“We won’t take anything less than 10% of global market share” in the next seven years, said Shigeya Kato, chairman of Showa Shell Sekiyu K.K., which has a 100% subsidy in module factory operator Solar Frontier. “The market has grown so much that even a 1 GW plant capacity won’t reach 10%.”

Solar Frontier said it could eventually build an overseas plant, but it must first prove to Showa Shell’s board of oilmen that its 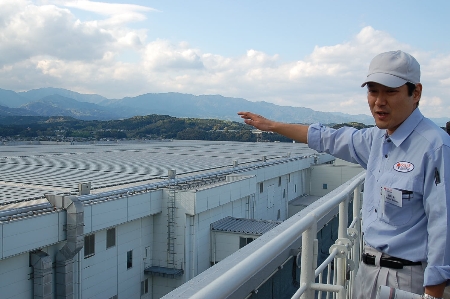 The company invested 100 billion yen, more than $1 billion, at its Kunitomi plant in Miyazaki Prefecture on the southwest island of Kyushu. Recouping that investment will be challenging, Kato said, because the Yen is trading low compared to the dollar and euro. Further complicating Solar Frontier’s efforts is the weak Japanese economy, which economists say will likely sink deeper into recession in the wake of the March 11 earthquake, tsunami and nuclear crisis that caused an estimated $300 billion in damage. Still, Solar Frontier leaders say demand for solar energy could be a bright story for this struggling country.

Solar Frontier’s Kunitomi factory produces modules that use a version of the copper, indium, gallium and selenium (CIGS) technology. More than one-dozen cleantech writers last week toured the factory, which the company claims is capable of producing 112,000 modules (130 W to 150 W each) per week.

In recent press releases, Solar Frontier has said its copper, indium and selenium (CIS) modules are more environmentally friendly than conventional thin-film because they do not use toxics like lead or cadmium. That marketing strategy takes aim at conventional, thin-film panels based on cadmium telluride (CdTe). Squarely in Solar Frontier’s sights is First Solar, the world’s leading thin-film panel manufacturer, which has also invested in bringing to market a competitive CIGS module, though its current modules are based on the CdTe platform.

“CIGS will undoubtedly capture a larger fraction of total PV sales based upon these new levels of performance,” says Ryne Raffaelle, director of the National Renewable Energy Laboratory’s National Center for Photovoltaics.

That is due to rapid increases in efficiency as the industry moves toward alternative materials that use less cadmium and fewer rare earth materials. 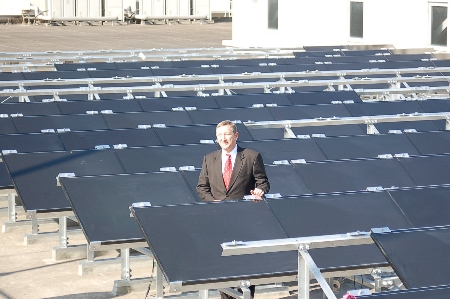 “They’re looking to operate with better materials that are cheaper and less toxic,” Raffaelle said.

“With respect to competitor claims regarding CdTe, we regard them as just that – competitor claims,” said First Solar’s Melanie Friedman. “It does nothing to advance the long-term adoption of PV technology, which should be the ultimate goal of our industry. Numerous scientific and technical studies and analysis consistently conclude that First Solar’s thin film PV technology does not pose a risk to human health or the environment.”

The move away from rare earths is especially crucial since China has cut back on exports. Though its panels are comprised of just 5% indium (most of which his recycled), Solar Frontier is working with IBM to replace indium with copper or zinc. The Solar Frontier and IBM research has achieved efficiencies of at least 9%, so there are still innovations necessary to replace indium, engineers said.

Solar Frontier’s Kunitomi factory and Sharp’s amorphous silicon (a-Si) facility in Osaka are being hailed by some as the return of Japan’s dominance in the solar manufacturing field. Sharp did not respond to a request to tour its factory in Osaka last week. More than a dozen reporters from Japan, Europe and the United States spent two days observing the Kunitomi facility through a tour funded by Solar Frontier.

Solar in the Nuclear Crisis

Experts say Japan’s investment in solar research and manufacturing is especially crucial while the country grapples with its energy policy in the wake of the nuclear crisis trigged by a tsunami that knocked out back-up power at reactors at Tokyo Electric Power Company’s Fukushima reactors.

Some have criticized the Japanese government for not taking a more aggressive, European-style approach to renewable energy subsidies and feed-in tariffs, but Solar Frontier officials say it was the Japanese government that mandated parent company Showa Shell to invest in photovoltaic R&D decades ago, making its gigawatt-scale plant possible.

Japan’s 54 nuclear reactors generate 30% of the country’s current electricity. Up to 50% of Japan’s electricity could come from nuclear by 2030, according to Reuters. With little acreage for solar farms, most of the installed PV capacity in Japan – and Solar Frontier’s domestic sales – comes from residential systems.

The factory operators say Japan will be able to lessen nuclear demand by increasing roof-top solar arrays on commercial buildings and residences. Also, many reactors, including the damaged Fukushima Daiichi reactors and a handful across the north, are inoperable due to earthquakes.

“The fact Japan can move forward without those reactors shows we can live without some nuclear,” said Philip White of the Citizens’ Nuclear Information Center, a Tokyo-based advocacy group that has called for the gradual reduction of nuclear power.

There is also potential to install utility-scale solar arrays on the farmland and cities contaminated with radiation, Kato said.

Showa Shell’s last major R&D investment, about 150 billion yen in the 1990s, resulted in a fluid catalytic “cracking” process that increased long-term profits for its refining business. Showa Shell executives said the investment in the gigawatt-scale solar factory is a strategy for the company to cope with “peak oil” and the increasing expense of importing oil from the Middle East.

“We’re already facing peak oil,” said Hiroshi Yoshida, Solar Frontier’s vice president and CEO of manufacturing. “The oil will always be there, but it’s more expensive to get.”

Solar Frontier’s factory is comprised of robots, laminating machines, conveyer belts and other processes packed tight within 400,000 square meters of factory space on three floors. The company guards its technology secrets so well that it asked journalists to sign a non-disclosure release before touring the facility. Writers balked at the document, but the tour went ahead on the condition certain areas could not be photographed.

“We wanted to prove to the world that we can do what we say,” said Native Texan Brooks Herring, Solar Frontier Executive Vice President of Communications and Operations.

He said the factory has been operating 24/7 since its soft opening in February.

The facility produced plasma screen televisions before Showa Shell converted it to house the custom-engineered solar process after scaling up from its 20 MW and 60 MW plants in nearby Miyazaki Prefecture.

All those processes require multiple megawatts of power. A 2 MW roof-mounted solar array covers the factory’s vast roof, but it provides just 1% of the plant’s energy needs. It is capable of providing up to 2%, but recent volcano eruptions in a distant part of Kyushu have dusted the panels with a thin layer of ash, reducing the efficiency.

Solar Frontier has joined its Asian competitors in marketing to the rapidly expanding North American market. Solar Frontier announced today that it will provide 1.2 MW of its CIS panels to Granite Construction in Coalinga, Calif. The system will provide up to 50% of the total energy required by the aggregate facility. 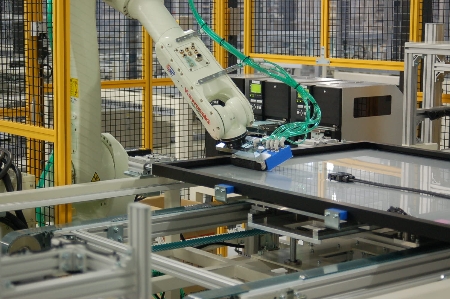 Solar Frontier is also competing against Suntech, Yingli and other Chinese companies, which are fast approaching the $1 per watt cost of installation goal set by the NREL. First Solar has said it is an industry price leader because its manufacturing costs are 75 cents per watt. Solar Frontier does not discuss its costs, but executives said the company’s panels offer a number of advantages, including a larger surface (3 feet by 4 feet) with higher efficiencies. (Left: A robotic arm applies a label to the back of a Solar Frontier CIS module.)

Don’t rule out cadmium telluride just yet, though. GE recently announced that PrimeStar Solar Inc., a startup that it invested in three years ago and now owns, recorded a record-high 12.8% efficiency for CdTe thin film solar panels. GE plans to take those panels to market with a 400-MW American manufacturing plant. First Solar says cadmium telluride is still superior to other technologies for cost competitiveness.

“CdTe PV has been shown to be successfully scalable and is currently the lowest-cost PV technology, which are important factors in ensuring that PV reaches its potential to displace the current use of fossil fuels,” said Friedman, the First Solar spokeswoman.

Solar Frontier is among a handful of next-generation solar manufacturers to graduate from research and development incubators at conventional energy companies. Oil giant BP, once the world’s leading solar module manufacturer, appears to be backing off its investments in renewable energy, however, while Showa Shell is doubling down.

Showa Shell began investing in research and development of solar technology during the energy crisis of the 1970s. It initially worked on cadmium technology, but the company in 1993 turned its solar focus to CIS after it showed potential for higher efficiencies. Showa Shell named its solar business Solar Frontier in 2007 before building manufacturing plants with 20 MW and 60 MW capacities. It scaled those facilities to the 1 GW Kunitomi plant in about a year’s time.

“We feel this provides the economies of scale necessary to compete globally,” Herring said.

Solar Frontier says the CIS modules from the Kunitomi factory are about 12.2% efficient, while it expects to reach 14.2% efficiency in the next few years. On April 15, Italy’s Albatech announced plans to distribute and install Solar Frontier’s thin-film CIS modules. 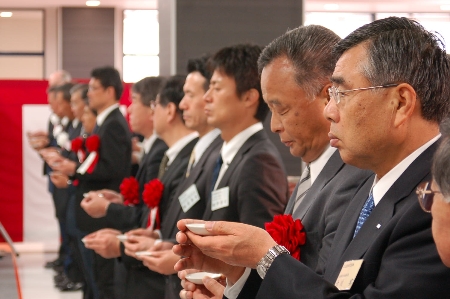 “We are extremely pleased to include in our product offering a competitive premium brand identified with innovation, efficiency and outstanding performance,” Raffaele Salutari, Sales and Marketing Director of Albatech, said in an April 15 statement.

Solar Frontier has also entered the Middle East market through a deal to supply Saudi Aramco with 10 megawatts of its solar modules, which will be installed atop 40 acres of parking structures. Saudi Aramco owns 15% or Showa Shell, while Royal Dutch Shell owns 35%. Multiple investors own the other 50% of shares traded on the Tokyo Stock Exchange.

(Right: Japanese leaders and businessmen partake in a Shinto ceremony to mark the opening of the Solar Frontier plant.)

The Saudi Aramco solar array is expected to provide enough energy to power the large office building nearby, and it will serve as a proving ground for thin-film panels in the world’s hottest climates.

It could also lead to more investment in solar power by the Middle East’s petroleum industry.

“As long as you remain a global leader in quality and cost, you can basically expect a reasonable return,” Kato said.

(Note: you can see more images from the factory tour in the image gallery, about  three quarters of the way up this page on the right side.)