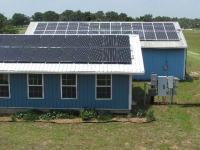 Intercepting photons from the sun 93 million miles away to power his rural central Texas ranch was not something Professor Bill Bard originally conceived of when he decided decades ago to become an electrical engineer, but after 45 years of teaching the subject to students at the University of Texas at Austin, that’s exactly what he recently did.

“I thought it would be cool to make electricity from solar panels,” Dr. Bard states, adding with a wide grin that “you can’t spell ‘geek’ without a double EE.” If anyone can appreciate the beauty and simplicity of converting sunlight into electrical current, it’s an electrical engineer.

Running calculations on the number of solar panels he could squeeze onto the various rooftops of his working Caldwell County ranch, Bard teamed up with Texas Solar Power Company of Austin to design and install a 10.31-kilowatt (kW) rooftop solar photovoltaic (PV) system.

In essence Bard converted his available roof space into a miniature utility power plant. The system consists of 24 Schuco 185W PV panels and 22 SolarWorld 240-W panels wired to two SMA SunnyBoy 7000 Inverters. The inverters transform current from DC to AC and funnel the charge to the meter panel which distributes electricity around his ranch or, as frequently occurs, out to the grid.

Bard monitors panel activity and output from the comfort of his home office on computer software. Total cost of the system was about $36,000, minus a 30% federal income tax credit. (Further grants and low interest loans are available to interested parties through the U.S. Department of Agriculture’s Rural Energy for America (REAP) program.)

Bard’s system produces between 900-1200 kilowatt hours (kWh) of electricity per month. The solar panels generate enough current to power Bard’s energy efficient home, barn, a lab, and two water wells. Since installation two years ago the system has generated nearly 33,000 kWh of electricity, a running tally updated in real time and displayed on his SunnyBoy inverters.

The solar array often generates more flowing electrons than he needs. This allows him to pipe a portion of his solar output back onto the electric grid through his two-way Itron smart meter interconnect with Bluebonnet Electric Cooperative. Once a year he receives a check for his “banked amount” of solar energy production from Bluebonnet Coop, about $540 in 2012.

How does it feel to have installed a green, environmentally-friendly energy technology in politically-conservative, oil and gas dominated Texas? Bard states that neighbors come by and view the project with interest. “They like what they see,” Bard observes. Some have installed solar gate openers and solar mobile stock tank pumps. Practicality, it appears, overrides politics when the need and benefit are obvious.

However, Bard’s motivation for installing a rooftop solar energy power plant on his ranch was neither environmental nor financial in origin. Besides enjoying tinkering with electronics, he states, he decided at this stage of life “to give back more than I take.”

“Everyone benefits,” Bard explains, “the solar panel makers, the solar installer, Bluebonnet Electric, and me.”

At age 69 Bard acknowledges that he will probably not see a complete return on his investment “in this lifetime.” In spite of that potential deal-breaker for many potential solar adopters, Bard offers the following rationale for installing solar: “I installed the system to lighten the load on the power plant, thereby reducing peak demand events. I also did it to reduce my carbon footprint on the atmosphere, however minute that reduction will be. I installed solar because it is plain cool to convert sunlight to electricity. And I did it as a statement to my neighbors and community that installing solar is in fact doable and advisable. I am an early adopter of a new energy technology and hope to inspire others to do the same.”

For Bard, promoting solar power generation means he “rests a little easier knowing that the local Fayette coal-powered plant has to work and pollute a little less since I installed my solar panels,” adding that “It’s great to blast the air conditioning all day long in the summer with energy coming directly from the sun.”

The U.S. Department of Energy’s National Renewable Energy Lab (NREL) estimates that on clear days Texas is capable of producing 127,000 megawatts (MW) of PV electricity from incoming sunlight. Conversely, the maximum load placed on all Texas power plants combined during peak demand periods tops out at about 70,000 MW, just over half the solar potential.

How much solar is currently being tapped in Texas? According to Maura Yates with Sun Edison, a major solar installer in Texas, about 115 MW of total solar generation occurs daily in the Lone Star State, a fraction of the full amount plowing into Texas daily from the nearest star eight light minutes away. The rest bites the dust in the drought-plagued state like so much oil running unused down a drain.