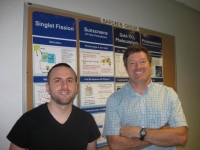 California, USA — A perspective article published last month by University of California, Riverside chemists in the Journal of Physical Chemistry Letters was selected as an Editors Choice — an honor only a handful of research papers receive. The perspective reviews the chemists’ work on “singlet fission,” a process in which a single photon generates a pair of excited states. This 1->2 conversion process, as it is known, has the potential to boost solar cell efficiency by as much as 30 percent.

Applications of the research include more energy-efficient lighting and photodetectors with 200 percent efficiency that can be used for night vision. Biology may use singlet fission to deal with high-energy solar photons without generating excess heat, as a protective mechanism.

Currently, solar cells work by absorbing a photon, which generates an exciton, which subsequently separates into an electron-hole pair.  It is these electrons that become solar electricity.  The efficiency of these solar cells is limited to about 32 percent, however, by what is called the “Shockley-Queisser Limit.”  Future solar cells, also known as “Third Generation” solar cells, will have to surpass this limit while remaining inexpensive, requiring the use of new physical processes. Singlet fission is an example of such a process. 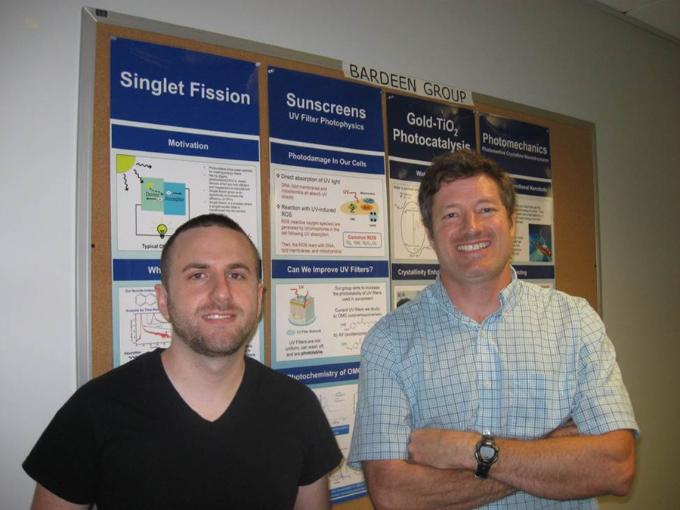 Geoffrey Piland (left) is a graduate student working with Christopher Bardeen (right). They are two of the four coauthors of the perspective article. Credit: Barden Lab, UC Riverside.

“Our research got its launch about ten years ago when we started thinking about solar energy and what new types of photophysics this might require,” said Christopher Bardeen, a professor of chemistry, whose lab led the research. “Global warming concerns and energy security have made solar energy conversion an important subject from society’s point-of-view.  More efficient solar cells would lead to wider use of this clean energy source.”

When a photon is absorbed, its energy takes the form of an exciton inside the material. Bardeen explained that excitons come in two “flavors,” defined by the electron spins in them.  One flavor is singlet, where all spins are paired.  The other flavor is triplet, where two electrons are unpaired.  In organic semiconductors, these two types of excitons have different energies.

“If a triplet exciton has half the energy of a singlet, then it is possible for one singlet exciton, generated by one photon, to split into two triplet excitons,” Bardeen said.  “Thus, you could have a 200 percent yield of excitons — and hopefully, electrons — per absorbed photon.”

He explained that the Shockley-Queisser Limit involves photon absorption to create an exciton, which is basically a bound electron (- charge) and hole (+ charge) pair. In order to get useful electron flow (photocurrent), these excitons must be dissociated. Ideally, one exciton produces one electron (hole) and thus current to run, say, a light bulb. 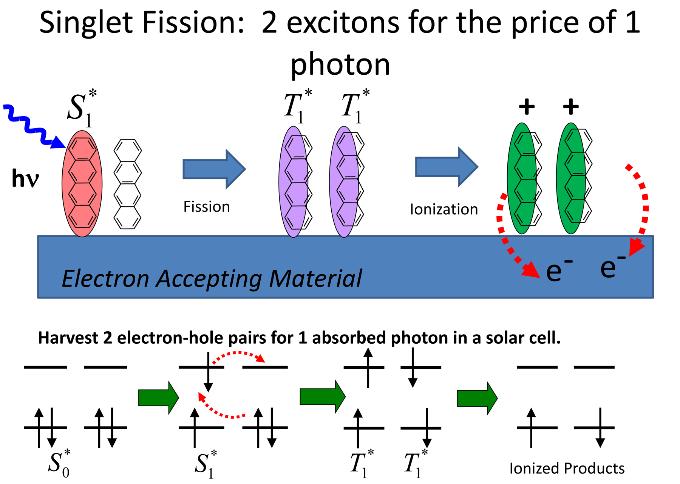 Singlet fission is a process in which a single photon generates a pair of excited states. This 1->2 conversion process has the potential to boost solar cell efficiency by as much as 30 percent. Credit: Bardeen Lab, UC Riverside.

“To absorb a photon, the photon energy has to be greater than the bandgap of the semiconductor, so you already miss part of the solar spectrum,” Bardeen said.  “But if you absorb a photon with energy higher than the bandgap, it has too much energy, and that excess energy is usually wasted as heat.  The trick is to take that high energy exciton and split the energy into two excitons, rather than dissipating it as heat.”

Bardeen explained that the singlet exciton spontaneously splits into the two triplets, through a mechanism that is still under active investigation.

“The exact mechanism is unknown, but it does happen quickly — at the sub-nanosecond timescale — and with high efficiency,” he said.  “Our work has shown that it is very sensitive to the alignment and position of the two molecules — at least two are required, since we have two excitons — involved in singlet fission. Recent work at MIT has already demonstrated an organic photovoltaic cell with more than 100 percent external quantum efficiency based on this effect.  It may be possible to integrate this effect with inorganic semiconductors and use it to raise their efficiencies.”

Next, Bardeen’s lab will look for new materials that exhibit singlet fission, figure out how to take the triplet excitons and turn them into photocurrent efficiently, and look at how the spin properties of the electrons affect the exciton dynamics.