More
Home Solar Solar Energy Coming to a Carport Near You 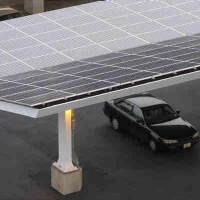 Arizona and New Jersey — In two of the hottest solar markets in the United States, solar energy is being built on or into parking structures. REC Solar announced that it would be designing and installing a 2.9 MW solar electric carport-mounted system for the Southern Arizona VA Health Care System (SAVAHCS). In New Jersey, Solaire Corporation announced that it would be supplying solar parking canopies for a 4.1-MW solar-power project that is being built at a Fortune 100 corporate office campus in central New Jersey.

Solaire said that it has already broken ground on the installation and expects to complete it by early 2011.  REC is expected to complete a smaller, 302-kW single-axis tracker mounted system for SAVAHCS this month, after which it will focus on the 2.9 MW carport that will cover seven separate parking areas.

When complete, the Solaire carport will total 1.1 miles of canopies, which are designed with a dual incline.  Its system also has an integrated decking and gutter system that protects people and cars from snow and ice, and protects the wiring and panels from unauthorized access, according to the company. Snow and rainwater captured by the canopies can be recycled for irrigation and other gray water uses, said the company.

REC said that when the 302-kW system and this carport are complete, the combined PV systems would significantly offset energy demand from the local utility grid for the more than 900,000 square foot medical center.