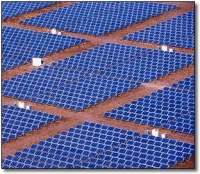 Brockton, Massachusetts [RenewableEnergyAccess.com] Massachusetts Governor Mitt Romney signed legislation allowing the city of Brockton to begin construction on what will soon be the largest solar electric array in New England.

What is now a blight on a 27 acre piece of land in the town — a once polluted “Brownfield site” — will redeem itself and become the city’s “Brightfield” project, a massive 500 kW, $3.6 million dollar solar photovoltaic (PV) array. A “brownfield site” means “real property, the expansion, redevelopment, or reuse of which may be complicated by the presence or potential presence of a hazardous substance, pollutant, or contaminant,” according to the U.S. Environmental Protection Agency (EPA) which designates and overseas the sites all across the country. The Brockton Gas Works plant was formerly located on the property and ground pollution has since been almost completely cleaned up by the current Bay State Gas Company. Because of contaminants capped below the ground, however, new development on the site is very limited. Nothing can penetrate further than 18 inches below the surface — but developers realized this still offered them the possibility to cover the barren swath of land with solar panels. “There are no other conceivable end uses for the site because of the contaminants capped below the ground,” said Lori Ribeiro Colombo, City of Brockton Brownfields Coordinator, when reached earlier for comment. “This site was selected because Brockton is 97 percent developed. Our economic revitalization requires us to make productive use of brownfields. This site was idle for decades and a blight in the neighborhood.” To include as many as 6,720 solar panels, this project would be among only a handful of solar projects this large in the United States, and in a class of its own in New England. The Massachusetts Technology Collaborative (MTC) the state’s economic development agency for renewable energy played a key role in getting the project off the ground. The agency administers the state’s public benefits fund, the Renewable Energy Trust, that helps spur projects such as these that offer clean, renewable energy while providing an influx of jobs and market stimulus for the renewable energy industry. The major stimulus in this case was the US$1.04 million in grant funding authorized by the MTC’s board of directors. This grant funding from the trust will help purchase and install the solar PV array. The city of Brockton, located south of Boston, will also contribute a large portion of funds toward the project. “We worked really hard on this as there was some opposition, but in the end people saw that this was a good opportunity to show what PV could do,” said Renewable Energy Trust Director Rob Pratt, when reached earlier for comment. “Perhaps the most exciting aspect of this project is the impact it can have toward shaping the way the next generation thinks about electricity and the direct link energy generation has with our environment.” The Brightfield project will include interpretive displays for educational purposes, allowing students from local schools to visit the solar array, and plans are underway to incorporate hands-on learning activities in science and math classes. Not only will the project make good use of the property and provide clean renewable electric power for the area, it will also provide valuable credits for the nascent green power market that trades in the commodities of clean energy. Likely customers for the project’s clean energy credits are the state’s utilities, which are now required by Massachusetts state law to source 2 percent of their total energy from renewable energy sources. To help this effort along, the MTC is committing $644,485 from its Massachusetts Green Power Partnership as a revenue guarantee for Renewable Energy Certificates (REC) generated by the project, which provides a revenue stream to support the overall financing of the array. This is similar to a long-term power purchase agreement but specific to purchasing the project’s RECs. While all the hard work, including funding and permitting, is out of the way, the Brightfield project itself will be up for grabs to the company that can provide the best proposal for the project, according to Lori Ribeiro Colombo. Spire Solar was involved in conducting the feasibility study, but the vendor for the array has not yet been selected. Since it is a municipality, the city of Brockton will have to procure the system following the state’s general laws, and a bidding process with request for proposals (RFP) is scheduled later this spring.